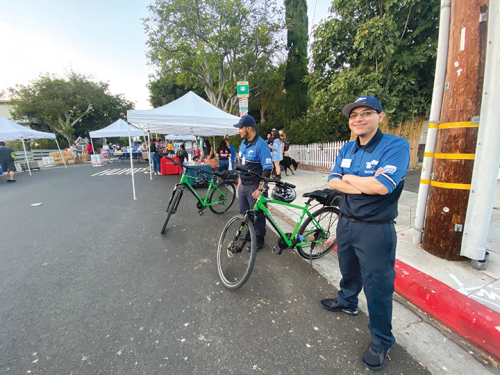 Thirty Block by Block ambassadors will be added by Oct. 1. (photo by Edwin Folven)

Following an update on the Block by Block Security Ambassador Program, the West Hollywood City Council voted on Sept. 19 to maintain the increased number of ambassadors and to delay the proposed elimination of deputies from the West Hollywood Sheriff’s Department for another 90 days, following staff reports on decreasing crime rates.

In June, the council had approved a budget following months of debate that increased Block by Block’s presence and reduced the number of sheriff’s deputies by four, while also adding an additional entertainment-focused deputy.

Now, the total number of deputies will actually increase, at least temporarily, from 60 to 61, with the additional entertainment deputy remaining. June’s proposed reduction will be revisited in December, which means the decision will likely fall on the next City Council after the November election. In the initial decision, the council voted to reduce two deputies after 90 days, and another two after an additional 90 days.

“We postponed the cut of two deputies until December to give Block by Block and the new program time to get us data needed and have the program time to settle,” Mayor Pro Tempore Sepi Shyne said. “That is what I voted on.”

“The headline is that all five of the West Hollywood City Council members voted to move forward with reducing the number of deputies in the new year,” Councilman John D’Amico said. “Crime is down and falling, and 30 additional security ambassadors are joining our public safety plan, the number of homeless is also down 60% – these trends are real, documented and make sense.  We opted to slow down our release of two deputies for an additional 90 days as we watch the effect of 30 additional ambassadors and confirm crime trends are holding. In my mind, this is sound policy based on good judgment, plus time. Councilman John Erickson pointed out that the budget, even as approved by the council in June, allotted the largest amount of money in the city’s history to the sheriff’s department.”

Mayor Lauren Meister said that she felt better about the future of public safety in West Hollywood.

“I’m relieved that my council colleagues made the sensible decision to not cut any deputies at this time,” Meister said. “While the security ambassadors are an important part of our public safety team, they are not a replacement for sheriff’s deputies.”

“We all unanimously voted to maintain the same service levels that we have currently with the additions that we’ve had to continue this mission to promote public safety and overall improve community safety throughout the city,” Councilman John Erickson said.

The staff report regarding the Block by Block program also gave an update on crime numbers within the city. Since a high of 2,145 calls for service in June, calls have fallen to 1,769 in August. Part 1 crimes, which are violent and property crimes, also spiked in June, hitting 352, and in August went down to a year-low of 163. 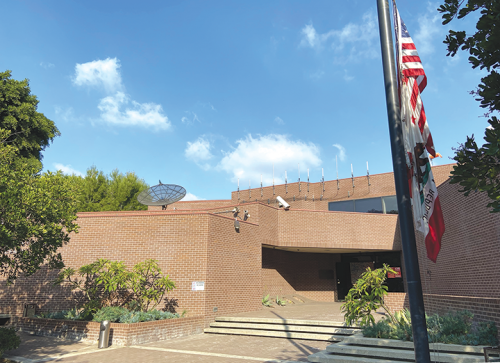 No sheriff’s deputies will be cut at the West Hollywood Sheriff’s Station at least until December. (photo by Edwin Folven)

In this period, the number of sheriff’s deputies was maintained, with the proposed reduction to have taken place over six months. Also during this time, the number of Block by Block ambassadors increased by 20, along with a new team leader and new operations supervisor, 73% of the 30 new positions that were approved by the City Council at the Aug. 1 meeting. Block by Block told the city that it expects have all 30 positions filled by the Oct. 1 deadline implemented in the same meeting.

Public safety has become a primary campaign issue in the race for the three open positions on the West Hollywood City Council. Horvath, who is running for Los Angeles City Supervisor, and D’Amico will vacate their council positions, and Meister is running for re-election. With the swearing in of new council members set for December, the decision on how to move forward with public safety in West Hollywood could be decided by the candidates chosen in the November election.

Among the candidates are former council members John Heilman and Steve Martin, both of whom have highlighted crime rates and public safety as cornerstones of their campaigns. Each is against cutting deputies. D’Amico addressed Heilman directly during the Sept. 19 meeting.

If the decision indeed falls to the next council, Shyne is likely to then be the city’s mayor. Shyne mentioned that she would like to consider West Hollywood establishing its own police department.

“We are also holding them way more accountable in many ways, as far as the sheriff’s department goes, and we’ll see how the election goes,” Shyne said. “We have a feasibility study out there to really study having our own police department, which is really what I’m interested in.”