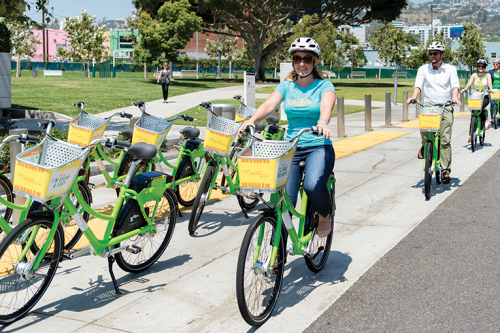 An expansion of its electric bike pilot initiatives is just one of a series of recent moves to create a green energy future by the West Hollywood City Council. At the Sept. 19 regular meeting, the council agreed to direct city staff to plan for the installation of e-bike charging stations on the path toward a permanent program. The council also approved an amendment to its zoning code that will prohibit new fossil fuel service stations and additional fossil fuel pumps from being constructed within city limits.

Long range planning manager for West Hollywood Francisco Contreras highlighted that one of the city’s “core values is respect for the environment, and the city has a strong record of developing and instituting progressive and forward-thinking environmental policies.”

“The Dockless Mobility Program is part of the city of West Hollywood’s efforts to expand its transportation network by supporting a range of environmentally sustainable options to get around the city and connect to the region at large,” Contreras said. “The city works regularly with residents, businesses and the community at large to develop innovative solutions to transportation challenges and to balance the needs of people who walk, bike, use transit and drive in the city of West Hollywood.”

Under the Sept. 19 directive, city staff will hire a consultant to construct the framework for a permanent program, which the City Council will consider next spring.

“Increasing biking infrastructure, including expanding our e-bike program, will make biking around our city and the region safer and more accessible for people who do not wish to travel solely by cars,” Councilwoman Lindsey Horvath said. “Additionally, recognizing that connecting to Metro rail is our ultimate goal, e-bikes will become a critical first/last mile option for people commuting by regional transit.”

“Committing to policies and programs of a sustainable future requires that we take the next steps in as many areas as soon as possible,” Councilman John D’Amico said. “Sustainability is no longer limited to hybrid cars and extra insulation. It requires investment in infrastructure and some fundamental behavior change – things that cities like ours are well positioned to do.”

The program has been of particular interest to Councilman John Erickson, who initiated the agenda item calling for e-bike charging stations.

“I’m an e-bike user myself. I actually rode my bike to the meeting,” Erickson said. “And yes, I rode it home [when the meeting was over] at 1:30 in the morning. And you know, they’re actually a great way to get around. They’re easy, they’re accessible. But what happens if you’re riding and ran out of a little bit of juice? So, I was thinking West Hollywood could help lead the way. We need to continue to push forward for the use of electric vehicles and e-bikes as we continue to improve our infrastructure throughout the city.”

The ban on new gas stations will “encourage the development of infrastructure that will continue to be relevant and help [the city] meet [its] ambitious goals,” Contreras said.

“The city has established policies and programs aimed at encouraging electric vehicle ownership and improving electric vehicle charging readiness in the city,” Contreras added. “Not only does the prohibition on new fossil fuel service stations in West Hollywood encourage alternatives to fossil fuel consumption, but it moves the city closer to meeting its desired target of carbon neutrality, or net-zero greenhouse gas emissions, for West Hollywood by 2035.”

“Prohibiting the expansion of gas stations and investing in EV charging stations throughout the city – including co-location at existing gas stations – will provide people with the practical infrastructure that helps to instill confidence to switch to electric vehicles,” Horvath said. “We need to be investing in our clean energy future today.”

During the same Sept. 19 meeting, the council also received an update on the development of a Climate Action Dashboard, which aims to further its commitment to a green future by keeping the community informed online of the city’s green energy programs. Contreras noted that the city is currently moving forward with 20 different climate measures and 60 sub-actions. Information on the city’s green initiatives can be found at weho.org/climateaction.

Horvath said that the city’s climate plans have “provided a clear roadmap for a sustainable, clean energy future.”

D’Amico noted that there is still more work to be done.

“I would hope that the city would press forward with requiring green building retrofits for all existing multi-family buildings including rain water retention requirements, expanded transit options including an expansion of our bike giveaway program and protected bike lanes, programs that highlight local food sourcing over frozen and imports, and a further expansion of our tree canopy to reduce heat island effects of concrete and asphalt,” D’Amico said.