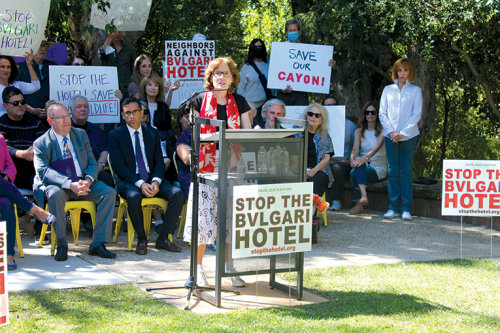 Preservationist Marian Dodge said she would rather see the land be donated for conservation uses. (photo by Joey Waldinger)

On Sept. 19, residents, city council members, celebrities and activists gathered at a home in Benedict Canyon to oppose a proposal to develop a sprawling luxury hotel on a Hutton Drive property.

Opponents of the proposed Bulgari Hotel, who began organizing against the development almost immediately after it was announced in 2018, will have to wait longer to know if their efforts have been successful.

In a surprise move, the Los Angeles City Council’s Planning and Land Use Management Committee on Sept. 20 tabled a vote on a motion to rescind a general plan amendment to rezone the area to allow for the hotel development to a later date.

Nonetheless, project opponents did not waste the opportunity to blast the proposal in front of the committee.

“This project is not worth the high cost and permanent environmental damage … the long-term commercialization of a fragile, bio-diverse habitat and the increased fire risk of a hotel guest carelessly tossing a cigarette and setting the entire canyon on fire,” said City Councilman Paul Koretz, 5th District, who wrote the motion.

“I ask you to stand with me today, and to stand up for my constituents,” Koretz added.

If completed, the hotel, proposed by LVMH, the luxury goods brand owned by French billionaire Bernard Arnault, would transform the steep hillside into a compound of 59 guest rooms spread over 19 buildings.

The main five-story hotel building alone would include two floors of subterranean parking, 7,960 square feet of restaurant and bar floor area, and 11,760 square feet of pool and deck area, among other amenities.

If approved, the project would require extensive grading, the removal of at least 700 trees, and it would clog the area’s already narrow roads, adding increased hazards to a “very high severity fire zone,” according to a community impact statement from the Bel-Air Beverly Crest Neighborhood Council.

Most concerning to the council was the developer’s plan to circumvent zoning laws through the use of “a so-called ‘specific plan.’”

The specific plan “is not only contrary to established policies and good zoning practices, it would also establish an irreversible precedent for future commercial development of the Santa Monica Mountains,” according to the statement.

Lawyers representing the development have contended that Koretz’s motion is inaccurate and would violate the city charter, municipal code and several common law statutes.

“The motion, … is unlawful, inequitable, and would set the city on a dangerous path,” Alfred Fraijo Jr., a representative of the law firm Sheppard, Mullin, Richter and Hampton, wrote in a request last fall for the PLUM committee to reject the motion.

During an interview, Koretz said that while he hopes the committee scuttles the project as proposed, he would not oppose a revised project that conforms with the existing residential zoning laws.

“Hopefully they revisit this project and they come up with something that actually meets the code, and they can build some homes and make a profit, and everyone would be much happier than having the first, but not undoubtedly the last hotel [in that area]”, Koretz said.

Should the PLUM Committee decide not to approve his motion, the developers would then finish the Environmental Impact Report and continue with “the normal development process,” Koretz added.

At that point, opponents’ only option would be to file a lawsuit, said Marian Dodge, vice president of the Federation of Hillside and Canyon Associations.

Like Koretz, Dodge also said she would not oppose the project if it complies with the existing residential and baseline hillside ordinances.

Asked if she would work with the developer to revise the project, Dodge said, “the best thing that could happen would be to have him donate the property to the Santa Monica Mountains Conservancy, and have it preserved forever.”

Shouldn’t churches have a place for dogs?

The hotel project brings misery and an enormous environmental hazards to the canyon. It reduces the canyon area into a unsavory and unhealthy commercial zone instead of a residential area that it is now. The hotel does not belong this canyon. It belongs to a busy commercial city center.