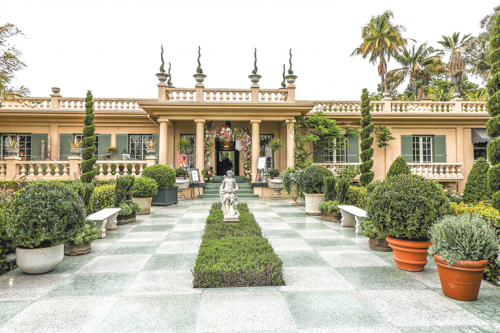 As part of an ongoing struggle over Los Angeles County’s proposed operational changes to the Virginia Robinson Gardens in Beverly Hills, city officials are preparing a letter in opposition to the plans.

The letter cites public comments concerned about the changes, but during an Aug. 23 City Council meeting, the public was hardly unified in its opposition.

“These proposed changes … will improve public access to the gardens, enabling more county residents, especially families and children, to experience this botanical and educational gem,” said Paulina Torres, an attorney with the National Resources Defense Council.

Although the gardens are in Beverly Hills, the property is operated by the county. If approved in its current form, the county’s proposal would greatly increase access to the park and the kind of activities allowed.

The county’s plans also allow for 24 special events per year in the park, up from four, currently.

A July draft supplemental environmental report found that while these changes would have a negligible effect on noise in the park – a finding some residents disputed – there would be other impacts, including a significant increase in traffic.

In the draft letter, city officials also wrote that turning the park into a commercial space would violate the original bequest of the space from Virginia Robinson to the city.

The council suggested “that the county deed the gardens property to the city, so the city may control the use and operation of the site in a manner that is not inconsistent with the original bequest and is compatible with adjacent residential uses,” the draft letter stated.

The draft letter must be submitted to the county before the Sept. 5 close of the DSEIR public comment period.

Many residents echoed the DSEIR’s findings during the Aug. 23 meeting, voicing concern about the impacts that increased activity would have on the tranquil park.

“Just because it doesn’t rise to the level of making your ears bleed, doesn’t mean it’s not a nuisance,” he said.

Messer also wondered if events would be unequally distributed throughout the year, noting that all of them could be concentrated during the summer months.

“Which means that every weekend night you would have to listen to their bands and their music until they shut them off,” Messer said.

Beverly Hills city planner Timothea Tway said her team will tweak the letter to ensure a more balanced view of the public’s sentiment.

“We’ll focus on the impacts,” Tway, said, adding, “We’ll talk about how we are not against increased access.”

“We want to support increased access with decreased impacts,” he said.

Vice Mayor Julian Gold said the best solution would be to return control of the park to the city.