Vintage: Beam me up to the Walk of Fame 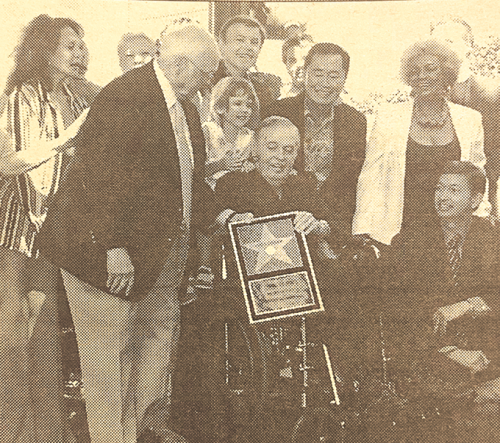 Fans of “Star Trek” were elated when the Hollywood Chamber of Commerce honored actor James Doohan, famous for his role as engineer Montgomery “Scotty” Scott on the series, with a star on the Walk of Fame at 7021 Hollywood Blvd. in this photograph in the Sept. 2, 2004, issue of the Beverly Press and Park Labrea News. Doohan was joined by fellow “Star Trek” cast members George Takei (helmsman Hikaru Sulu) and Nichelle Nichols (Lt. Nyota Uhura), as well as the late Honorary Mayor of Hollywood Johnny Grant and former Hollywood Chamber president and CEO Leron Gubler. At the time, Doohan had recently been diagnosed with Alzheimer’s disease and made his final public appearance during the star ceremony on Aug. 31, 2004. The same week, he also appeared at the “Beam Me Up Scotty…One Last Time” ‘Star Trek” convention at the Hollywood Renaissance Hotel and participated in a fundraiser benefiting Alzheimer’s disease research. Doohan died on July 20, 2005.

Advertising exhibition to display at LACMA

Plays to present at Greystone