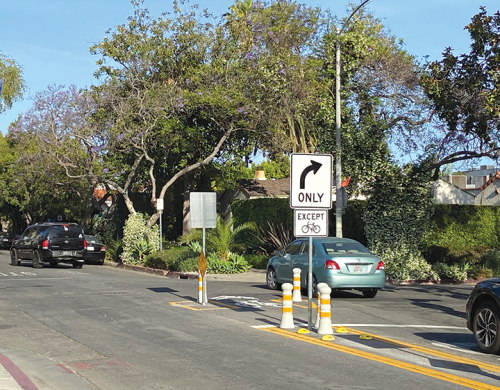 People who provided input to the city were mostly opposed to a traffic diverter at Willoughby Avenue and Ogden Drive. (photo by Edwin Folven)

The city of West Hollywood is preparing to remove a traffic diverter, curb extensions and mini-roundabout on Sept. 27 at three intersections along Willoughby Avenue that are part of a pilot project testing the effect of street infrastructure on traffic safety in the residential neighborhood.

The city installed the traffic-calming fixtures in April after receiving complaints from residents about cut-through traffic in the community. Traffic studies revealed that Willoughby Avenue is a street used by drivers traveling between the San Fernando Valley and central portions of Los Angeles who are trying to avoid congestion on major streets in the surrounding area. West Hollywood installed the traffic calming measures in April to test the amenities in the neighborhoods south of Santa Monica Boulevard between La Brea and Fairfax avenues. West Hollywood transportation officials worked with the Los Angeles Department of Transportation to implement the pilot project because the West Hollywood-Los Angeles border runs down the center of Willoughby Avenue.

The traffic diverter, curb extensions and mini-roundabout were only intended to be in place for approximately four months, West Hollywood senior transportation planner Bob Cheung said. They were comprised of signage, street markings and plastic posts installed in the street.

“They were always meant to be temporary. They are made of plastic and won’t stand up … they won’t last long out there,” Cheung said. “We installed them as part of a study. Our final recommendations could include a variety of different treatments.”

The traffic diverter is located at Ogden Drive and includes a stop sign and a sign indicating only right turns are permitted. The curb extensions are located at Willoughby and Spaulding avenues, and the roundabout is at Willoughby and Curson avenues. Both of those intersections are also controlled by four-way stop signs.

The city of West Hollywood held public meetings in August on the traffic calming measures and solicited input from the public via a survey throughout the summer. Cheung said they received approximately 500 total responses, with a majority of people supporting the curb extensions and roundabout, but not the traffic diverter. When the diverter was first installed, many motorists drove around the sign in the middle of the street indicating they are supposed to turn left, and kept going straight. To force drivers to turn right, the city later installed posts blocking the middle of the lane.

Cheung said a report on the traffic calming measures will be compiled and forwarded to the West Hollywood City Council for review, possibly later this fall. The City Council will determine whether any of the features will be permanently installed in the future.

Cheung added that the city is also considering options such as bike lanes on Vista Street/Gardner Avenue as part of the pilot project, but that component is separate from the installations on Willoughby Avenue.

“With Gardner, we are not proposing any sort of treatments that we saw on Willoughby – those measures are really to help with cut-through traffic and speeding,” Cheung said. “Vista/Gardener is a whole different animal. Gardner is wide, there’s opportunities to put bike lanes there and to enhance those features. We’re also looking at adding more parking and also beautifying the corridor. There could be some plantings as well.”

Cheung also responded to posts on social media about the pilot project contending the city wasted $300,000 on traffic measures, only to remove them. Cheung clarified that the city budgeted $300,000 for the entire project, including the studies, and the cost for the temporary street infrastructure was $26,000.

“With some of the misinformation that came out on social media that program has been canceled and the experience cost the city $300,000, that’s all misinformation,” Cheung added. “It is not canceled. We just finished the outreach phase and we’re taking it down. Now, we’re looking at developing options and recommendations before we take it back to the City Council.”

Peter Nichols, co-founder of the Melrose Action Neighborhood Watch, said the traffic diverter did not make sense because it rerouted drivers to Waring Avenue, a residential street one block south of Willoughby. He said the curb extensions and mini-roundabouts may have merit, but the roundabout should be placed at an intersection with more space.

“With the roundabout, the concept is good but the intersection is too small,” Nichols added. “The general feeling was the traffic diverter was the most illogical piece of the whole pie. It was a bad idea.”