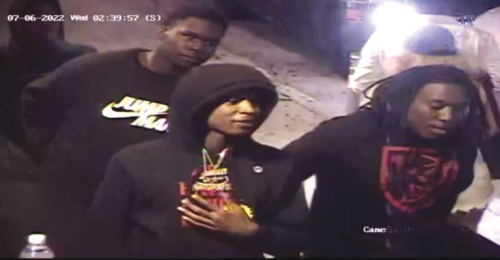 Security cameras captured images of the alleged suspects prior to the robbery. (photo courtesy of the LAPD)

Investigators with the Los Angeles Police Department’s Robbery-Homicide Division have announced the arrest of a 24-year-old man for an alleged follow-home robbery in July in the Fairfax District.

The suspect, identified as Deantone Guillory, of Compton, was allegedly among a group of six male suspects who followed three male victims and robbed them at approximately 4:10 a.m. on July 6 at a gas station in the 7800 block of Melrose Avenue. Two additional suspects – Michael Moore and Amough Keyana Bonton – were arrested on Aug. 22 for the robbery. Three other suspects are still being sought by police.

Detectives said the three victims and the six suspects had been at a strip club that remains open until 4:30 a.m. near Sunset Boulevard and La Brea Avenue. The suspects allegedly followed the victims when they left. The victims stopped at the gas station and the suspects pulled up in two vehicles and parked in a nearby alley, police said. The suspects got out, pointed handguns at the victims and stole jewelry, money and phones, authorities said.

Police did not disclose how they identified the suspects, but released security camera footage allegedly showing them outside the strip club on the night of the robbery, and in vehicles near the gas station. To view the security camera video, visit lapdonline.org/newsroom/arrests-made-on-follow-away-robbery-nr22244mc.

Police said Moore is from Fairfield, California, and Bonton is from Sacramento. Both were out on bail for gun charges at the time of their arrests.

Investigators allegedly tied Moore and Bonton to an apartment at an undisclosed location in Hollywood and arrested the suspects. Officers served a search warrant and recovered two handguns and thousands of dollars in cash, police said. The Los Angeles County District Attorney’s Office charged Moore and Bonton on Aug. 24 with three counts of robbery. Moore is being held on $230,000 bail, while bail for Bonton was set at $175,000. Guillory is being held without bail.

Detectives believe the suspects may be involved in other robberies and are seeking to identify the remaining assailants from the July 6 hold-up. Anyone with information is urged to call detectives with the LAPD’s Follow Home Robbery Task Force at (213)486-6840. During weekends and off-hours, call the LAPD’s hotline at (877)LAPD247.