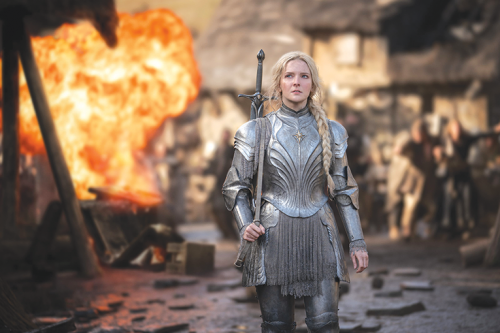 Morfydd Clark appears as Galadriel in the epic fantasy series “The Rings of Power.” (photo courtesy of Prime)

At least it’s better than the “Hobbit” trilogy. That alone might pique the interest of plenty to check out Prime’s “The Rings of Power,” a massive budget prequel series set in J.R.R. Tolkien’s fantastic Middle-earth realm.

As is, this epic series, though gorgeous, suffers from a tragic condition that claims too many: a slow pilot. Sure, “25 million global viewers in the first 24 hours last Saturday, the once online bookstore, now book adapter declared. But that doesn’t account for meandering exposition. If only more series bravely delved into the future, namely a dystopian one with a mad guy named Max.

Before you roll your eyes, pump the breaks and follow along. “Mad Max: Fury Road” caught critics and movie lovers off guard. After years of silence, a franchise returns (sounds familiar), which often invites ire, decrees of shameless cash grabs. (As if something like “Beyond Thunderdome” and/or “The Hobbit: The Battle of the Five Armies” don’t hurt that nostalgic bar, anyways.)

But “Fury Road” was so impressive it earned ample accolades, including a best pic nom. How exactly this transpired is important here. Naysayers might bemoan an actioner that operates like one long chase scene, wondering where the character development went.

That’s the genius. It all happens on the road through glances and shared actions. Dialogue and overt declarations of affection need not apply. Cut to “Rings,” which is far too chatty. It lacks the visual storytelling to match its incredible visuals.

Sure, this is the small screen, but the production budget for a planned five seasons will likely reach $1 billion, while a Marvel blockbuster averages $170 million to make. And oh boy is this show pretty. It feels mike Middle-earth and succeeds in lighting a night-time shot, while HBO’s fantasy offerings spend so much money developing similar moments in near-darkness, testing your TV’s brightness settings.

Beyond visual splendor, including a baller sea monster in episode two, the characters mostly don’t invite much interest – their dialogue to blame. When a younger Galadriel (Morfydd Clark), easily the most interesting character, chats with a younger Elrond (Robert Aramayo), a miscast compared to Gal’s bro Finrod (Will Fletcher), they lay bare all motivations. 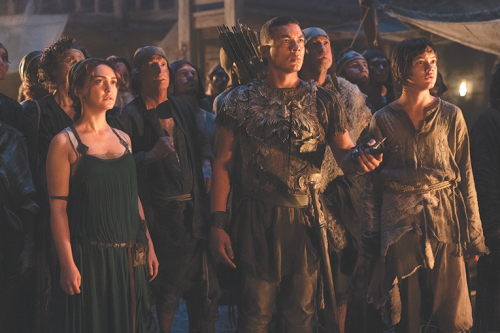 “The Rings of Power,” set in J.R.R. Tolkien’s fantastic Middle-earth, offers stunning visuals, but has a plot that is slow to develop. (photo courtesy of Prime)

Gal’s manhunt for Sauron hundreds of years after the fall of his former master has strained ties to comrades, something the first scene already established. And the majority of screen time across the first two episodes favor characters over a driving story.

A story’s there, kind of. As of now, however, it all feels like rush hour traffic, a story aching to find an open lane. It sure seems like a small army of investors have a say, including Amazon, New Line Cinema, HarperCollins and the Tolkien Estate. That’s a lot of veto power the showrunners must face.

Still, this might be a Prime project, but New Line, a Warner company behind “The Lord of the Rings,” is there, and those folks should know better than to ignore the lessons from another Warner flick, “Fury Road.” OK, perhaps that connection is thin, but Max, Furiosa and the rest enjoy varying degrees of mystique and fleshed out emotional connections in a story with a unified purpose.

Do note, plenty of great shows choose the slow lane at first. “Parks and Recreation” is near unwatchable for a season. “Brooklyn Nine-Nine” takes several episodes to go off. “Mad Men” too. And so many HBO inaugural debuts play like that jerk in the carpool lane going five under.

They don’t all start with the blazing speed of “Lost” or “The West Wing.” Perhaps that was an appeal for the Tolkien Estate. Former head Christopher Tolkien, who passed in 2020, notoriously disliked Peter Jackson’s reign, claiming all parties involved, but mostly Jackson, “eviscerated the book by making it an action movie for young people aged 15 to 25,” he told Le Monde in 2012.

To be honest, an adaptation that made him happy might not be enjoyable for the masses. And if “The Rings of Power” doesn’t pick up the pace, it faces a similar fate. At the moment, it seems like the product of something trying to appease too many masters.

I don’t mean to say “Rings” should lean into action like “Fury Road” does. That’s too literal an interpretation of my thesis. Instead, consider this: Let the characters unfold on the go, amidst the world they traverse. Otherwise, things will start to feel like a series of Wikipedia entries on similar topics.

“The Rings of Power” is hardly unwatchable, but doesn’t shock or awe. At least not yet. Time will tell if this one speeds up or runs out of gas, losing those viewers who tuned in on name recognition alone. Until then, “Mad Max: Fury Road” sports a dude strapped to bungee cords rocking a flame-belching guitar, so I’ll be rewatching that.

Sipping Rosé on Rodeo at TheBLVD