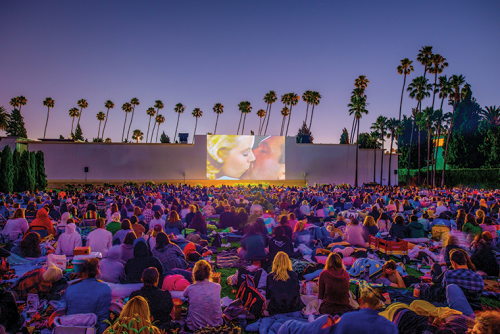 From far and wide, movie fans make the trek to Hollywood Forever Cemetery on summer weekends to take in a well-known flick. Hosted by the organization Cinespia, the 2022 season included, among others, “Grease,” “The Birds, “Selena,” “Back to the Future” and “Twilight.”

Attendees bring blankets, baskets brimming with snacks, and settle in on the Fairbanks Lawn for a cinematic moment in the heart of Tinsel Town. If they turn their head to the left, they’ll see the back of the Paramount lot. If they wander around the cemetery plots, they’ll find the names of some of the industry’s most legendary luminaries, from Burt Reynolds to Cecil B. DeMille.

“I had a film club with my friends, and we were looking for places to screen,” Wyatt said. “And we had another friend who worked there.”

Seeing the lawn and the large wall beside it, Wyatt knew they had found the perfect location to screen a film.

“We pitched it to the cemetery, and they were interested,” he said.

They chose the 1951 Alfred Hitchcock suspense classic, “Strangers on a Train,” to kick off the event.

“There’s so much Hollywood history at the cemetery. So many people have their final resting place there. So, it felt right to do something from classic cinema. Hitchcock, I think, would have liked it, knowing that his movie was showing in the cemetery. And, of course, Hitchcock movies always grab an audience and thrill them and scare them,” Wyatt said. The screening was a success, so they “just kept going.” 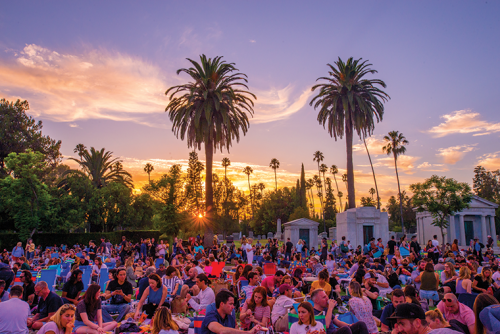 The sizable field of grass may be covered with people during screenings, but it is unique in that it is one of the few corners of the expansive cemetery that isn’t full of tombstones and mausoleums. During a typical day, it’s empty, in accordance with the wishes of its namesake.

President of Hollywood Forever Tyler Cassity said that for many years, the area was considered a waste of space. In the 1990s, the cemetery had fallen into bankruptcy. Cassity led the charge to use events as a way of making additional revenue.

“They kind of forgot about [the lawn],” Cassity said. “And one of our concepts was that we needed to keep this as a town square. And so that involved, in the beginning, trying a lot of different things. Some of them survived as traditions like [the cemetery’s annual] Dia de los Muertos [celebration].”

That event served as a tipoff to the community that Hollywood Forever “wanted them to come in,” Cassity added.

“They hadn’t really been welcome before,” Cassity said. He added that prior to Cinespia’s involvement, there had been a couple of film screenings on the lawn. These were organized by Marvin Page, a longtime local film savant who is now interred at Hollywood Forever.

“He was an old time Hollywood casting director,” Cassity explained. “He actually helped put together the first two screenings, which were for [Rudolph] Valentino. We started with silents.”

Valentino, whose truncated film career ended in 1926 with his death at age 31, is another of the many movie personalities counted among the cemetery’s residents.

Older classics still often make their way to the large, white wall where the films are projected at the cemetery. In June, Cinespia paid tribute to the centennial of Judy Garland’s birth by showing “The Wizard of Oz” with Garland’s daughter Lorna Luft in attendance. Garland was moved to Hollywood Forever in 2017 after resting for several decades in New York.

“One of our main goals [is] to just show the whole tapestry of film over the years, and hopefully, get someone excited about a director or actor from the past that was making great films that still resonate today, no matter who you are,” Wyatt said. “They just do, and it’s real. We live in a city that’s filled with creative people, people who are making films, people who are fans of films, and one of the things I love about what Cinespia has become, is that all of these people have a place to come together.”