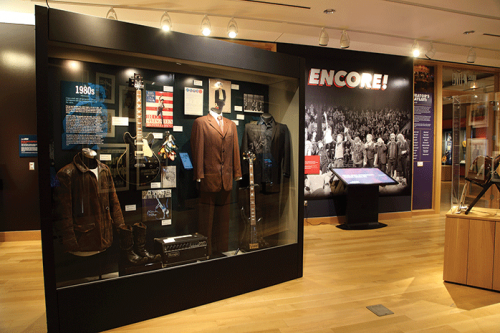 For nearly half a century, Bruce Springsteen and the E Street Band have exemplified the crowd-pleasing, soul-shaking, energy-exploding excitement of rock and roll onstage.

From an intimate look into Springsteen’s creative process to shedding light on how he became – and remains – one of the greatest live performers in rock and roll history, the Grammy Museum’s “Bruce Springsteen Live!” explores the evolution of Springsteen through the decades and grants exclusive backstage access to Springsteen and the E Street Band’s legendary performances.

The museum is also asking all Springsteen fans to be part of the exhibit by submitting a video sharing their live concert experiences from Springsteen shows over the years.

Excerpts of this will be part of a new exhibit film and can be seen throughout the gallery.

On Sept. 23, Springsteen’s 73rd birthday, the museum is inviting fans to stop by and share their stories in person and on-camera and wish Bruce a “happy birthday.”

In partnership with The Bruce Springsteen Archives and Center for American Music at Monmouth University, the traveling exhibit launches at the Museum’s downtown Los Angeles location on Oct. 15 and will run through April 2, 2023.

“We’re also thrilled to offer a special, expanded exhibit with the help of Springsteen fans for a one-of-a-kind immersive experience.”

From Springsteen’s earliest days on the Jersey Shore, performing in dingy clubs and boardwalk bars, to performing sold-out superstar stadium shows, his aim was to always exceed the loftiest expectations.

“Bruce Springsteen Live!” will feature 49 years of iconic artifacts, live performance footage, instruments and stage costumes, exclusive interviews, concert posters and photography, as well as unique interactive displays to immerse fans into the minds of Springsteen and the E Street Band’s prolific process and how they prepare for concerts and tours.

“This exhibit will give fresh insight into how they’ve been able to remain one of the greatest live acts for five decades.”

“Since his first west coast show as a touring musician at the Troubadour in 1973 to the present day, Bruce has performed over 100 shows in the Los Angeles area and has thrilled millions of fans with his electrifying performances.

This extensive exhibit provides a peek behind the curtain and a stirring trip down memory lane.” For tickets, visit grammymuseumexp.org/bruce-springsteen.

The Grammy Museum is located at 3030 Olympic Blvd.

9/11 exhibit to open at Holocaust Museum