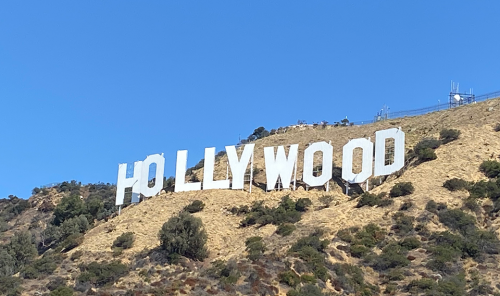 The Hollywood sign has been a Los Angeles landmark since 1923. (photo by Edwin Folven)

High above the city on a steep and rugged hillside sits the most famous sign in the world. The nine 45-foot-tall sparkling white letters that spell out H-O-L-L-Y-W-O-O-D are visible from miles around, symbolizing both the physical place that is Hollywood, and the culture, lifestyle and dreams it represents for millions of people.

What started as a billboard for a real estate development nearly 100 years ago is now woven into the fabric of the city. With the support of the Hollywood Chamber of Commerce and Hollywood Sign Trust, the monument is ready to begin its next 100 years in 2023. Get ready for a big celebration.

“We’re going to be using the entirety of 2023 to celebrate the 100th anniversary of the sign,” said Jeff Zarrinnam, chair of the Hollywood Sign Trust. “There’s a lot of things that we’re working on, and they will be unveiled at the appropriate time. I’ve got to have my own cliffhangers. It will be a citywide celebration of the sign and there will be a series of different events throughout the year.”

In preparation, the trust and paint company Sherwin-Williams are partnering to give the sign a shiny fresh coat of white paint. Zarrinnam hinted that the 100th anniversary celebration may include lighting the sign at night, which hasn’t been done on a regular basis since 1933.

The sign’s storied history and its evolution over the past century will be on full display in true Hollywood fashion. The first iteration of the sign was erected in 1923 and read “HOLLYWOODLAND.” As an advertisement for a real estate development conceived by a group of wealthy Angelenos including Los Angeles Times publisher Harry Chandler, the sign towered over the growing community below and became an instant landmark, Zarrinnam said. The real estate project never came to fruition, and by the early 1940s, the landowners donated the property to the city, which annexed it into Griffith Park. By that time, the initial sign had fallen into disrepair. Made from old telephone poles, wire and wood, it couldn’t withstand the elements, Zarrinnam added. 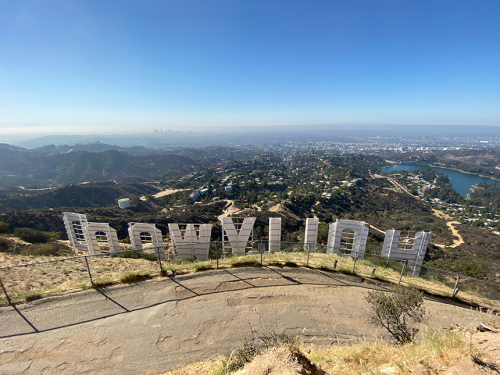 Hiking to the Hollywood sign itself is prohibited, but an overlook above it offers sweeping views for hikers. (photo by Edwin Folven)

“The Hollywood sign was originally built to stay up for only about 18 months. It was never meant to be permanent,” he said. “By 1945, they had donated the land to the city of Los Angeles, which wasn’t doing anything with the sign. The Hollywood sign was now falling apart, and the ‘H’ had fallen down and it read “OLLYWOOD.’ The chamber of commerce approached the city and said, ‘We want to fix the sign because we’re getting all these complaints, it’s a reflection of Hollywood, it represents our industry.’ The Hollywood Chamber of Commerce stepped in, put money toward fixing the sign and removed the ‘LAND’ part of it in 1949. Since then, it’s just been ‘HOLLYWOOD.’”

The chamber has been the sign’s caretaker ever since, in partnership with the city, which owns the hillside below it. The chamber owns the licensing rights for the sign’s image and the Hollywood Sign Trust, which was established by the chamber, oversees upkeep and capital improvements to the sign itself.

From the 1950s-1970s, the Hollywood Sign underwent periodic restoration and painting, but no major structural repairs or changes were made. Los Angeles designated it as a historic-cultural landmark in 1973. Five years later, like a story straight off the silver screen, the Hollywood sign underwent a rebirth after the chamber raised $250,000 for an overhaul. The result was a complete rebuild that created the sign in place today.

Constructed from corrugated sheet metal, the letters are fastened to steel beams embedded in the hillside. Each is a free standing structure, giving the letters their iconic offset appearance. In late 2021, a project to remove three-feet of soil and debris around the base of the sign was completed, uncovering places where members of the 1978 construction crew signed their names.

“We found out there is another famous place in Hollywood with important names in cement,” Zarrinnam joked. “It was a surprise. We didn’t know they were there.”

Zarrinnam said the trust and chamber of commerce encourage people to use the hiking trails that lead to the landmark, enjoy the sign and learn about its history. However, Zarrinnam asked that people do so responsibly without disturbing residents of the Hollywood Hills near the sign, or the fragile hillside and wildlife that call the area home. The Los Angeles Police Department provides 24-hour security in a space on top of Mt. Lee. The public can hike to a viewpoint on the peak just above the sign, a 7-mile strenuous walk. No vehicles are permitted. A fence separates the trail from the hillside and climbing the steep terrain to the sign is illegal, punishable by a $1,000 fine. Zarrinnam said the rules are in place to ensure people’s safety and to preserve the sign for future generations.

“It’s a magical place, a historic symbol of our city,” he added. “It symbolizes the hopes and dreams of everybody, because everybody has a memory from a particular film, and when they look at the sign, it reminds them of that experience. We hope people will take time to learn more about the Hollywood sign and celebrate it. It’s the most famous sign in the world.”