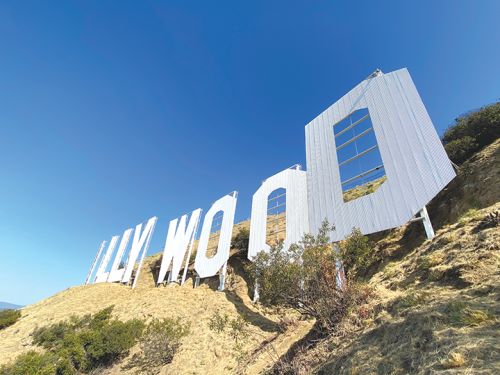 The Hollywood sign is being repainted to give it a fresh look for its centennial anniversary. (photo by Edwin Folven)

The Hollywood sign is getting a shiny new coat of white paint to ready it for its milestone 100th anniversary in 2023.

The Hollywood Sign Trust, which oversees maintenance and upkeep of the sign, announced that crews began preparation work on Sept. 19 and will be painting the sign through Nov. 1. The eight-week project is being completed through a partnership with Sherwin-Williams, which is donating the paint and materials, and Duggan & Associates, which is completing the project. Crews will climb the 45-foot-high letters and apply 400 gallons of primer and paint. The color – Emerald Rain Refresh in Extra White SW 7006 – is being referred to as Hollywood Centennial White for the momentous celebration. Sherwin-Williams completed a similar pro bono painting project on the Hollywood sign in 2012.

“The sign is the pride of Los Angeles and we are excited for fans all around the world to see this makeover for a very special 100th anniversary,” said Jeff Zarrinnam, chair of the Hollywood Sign Trust. “The opportunity to partner again with Sherwin-Williams on this extensive project will help continue the legacy of the sign, a symbol of a place where magic is possible and where dreams can come true.”

Zarrinnam added that crews will utilize swing stages, similar to platforms used by window washers, to pressure wash and repaint the sign. A press conference and dedication ceremony will be held when the project is finished, Zarrinnam said.

“It’s one of the first things we are doing to kick off our anniversary year,” he added. “There are a lot of things coming, but this kicks it off.”

The Hollywood Sign Trust has remained tight-lipped about the centennial anniversary events, but Zarrinnam said it will be a year-long series of events, with many focusing on education about the sign’s history.

“We’re going to be using the entirety of 2023 to celebrate the 100th anniversary of the sign,” Zarrinnam added. “There’s a lot of things that we’re working on, and they will  be unveiled at the appropriate time. I’ve got to have my own cliff-hangers. It will be a citywide celebration of the sign and there will be a series of different events throughout the year.”

The Hollywood sign has been a landmark in the city since 1923, when it was erected to advertise a real estate development known as “HOLLYWOODLAND.” The project was never built, and the sign and land around it was donated in the 1940s to the city of Los Angeles and added to Griffith Park. The sign fell into disrepair until the Hollywood Chamber of Commerce stepped in and became its caretaker in 1949. The word “LAND” was removed, and the sign has been an icon symbolizing Hollywood ever since, Zarrinnam added.

In 1973, the Hollywood sign was designated a historic-cultural landmark in the city of Los Angeles, and in 1978, the Hollywood Chamber oversaw a complete overhaul of the sign. Periodic painting projects and upkeep efforts occurred over the following decades leading to the painting projects in 2012, in celebration of the 90th anniversary, and now 2022 for the centennial.

“The paint has a lifespan of approximately 10 years, so we are going to be giving the sign a refresh,” Zarrinnam said. “We are not completely stripping it this time, they will be painting over the existing paint. Over time, it fades because of the elements, so we are repainting it and bringing it back so it is ready for its 100th anniversary next year.”

The public is not allowed to visit the sign itself because it is located on a steep hillside, but people can hike to a viewpoint located above the sign on Mount Lee. The Hollywood sign is under 24-hour security surveillance monitored by the Los Angeles Police Department. The public can follow the painting project on the sign’s webcams by visiting hollywoodsign.org/webcam.

A time for repentance and new beginnings