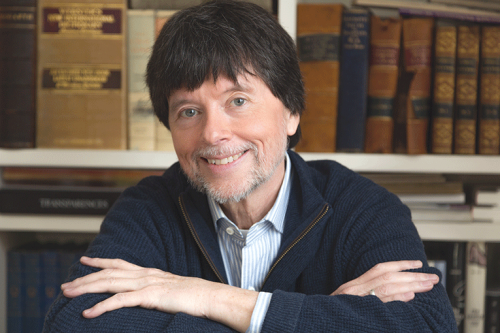 Documentary filmmaker Ken Burns will appear as the final speaker in this year’s series on April 30. (photo courtesy of the Distinguished Speakers Series of the Westside)

The Distinguished Speakers Series of the Westside has announced the upcoming speakers appearing in its seventh season at the Saban Theater in Beverly Hills.

The season runs from Oct. 16 through April 30, and includes Ken Burns, Misty Copeland, Neil deGrasse Tyson, Admiral James Stavridis, Cristina Mittermeier and Bob Eubanks with Ticket to Ride. Tickets to the series are sold in subscription packages ranging from $210-$660 for all six evenings.

“We search the globe to find great speakers whose accomplishments and opinions challenge us. This season we look forward to riveting personal stories, epic photos taking us on global adventures, learning from science and historical greats and laughing and listening in awe,” said Kathy Winterhalder, co-owner of the Distinguished Speakers Series of the Westside. “What makes our series unique is that instead of the media selecting the sound bites or quotes, our patrons can listen, submit questions and create their own opinion.”

The series kicks off on Oct. 16 with ballet dancer Copeland, who will detail the path to her becoming the first Black principal dancer with the prestigious American Ballet Theatre. DeGrasse Tyson will take the stage on Nov. 13. Through a powerful narrative, the astrophysicist and current head of the Hayden Planetarium will explore the intersections between space, science, culture and life itself.

Former Supreme Allied NATO Commander and decorated admiral Stavridis will speak on Jan. 22, offering rare and timely insight on the United States and the evolving geopolitical climate, including the War in Ukraine, the role of NATO and its broader impact, U.S. foreign policy and the global marketplace. On Feb. 5, photographer Mittermeier will take audiences on an epic visual journey around the most remote corners of the planet. She was named as National Geographic’s Adventurers of the Year in 2018.

Eubanks will bring an inaugural musical experience to audiences on March 19 by sharing his neverbefore-heard stories about bringing the Beatles to the United States. His stories will be interlaced with Beatles songs performed by the tribute band Ticket to Ride.

The series will conclude with Emmy award-winning documentarian filmmaker Burns on April 30. He will chronicle the aspects of U.S. history that make the country unique by engaging and celebrating commonalities.

The Saban Theatre is located at 8440 Wilshire Blvd. Each presentation begins at 7 p.m. Subscriptions can be purchased by calling (310)546-6222, and by visiting speakersla.com.