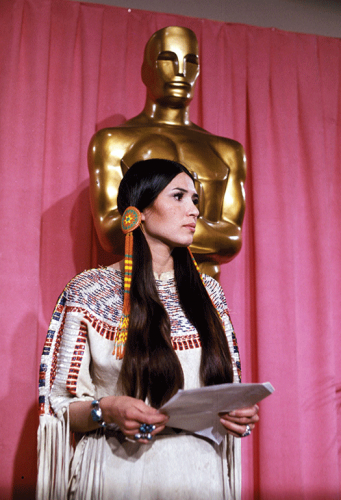 Sacheen Littlefeather appeared at the 1973 Academy Awards on behalf of Marlon Brando to refuse his Oscar for “The Godfather.” (photo courtesy of the Academy Museum)

The event, programmed by Littlefeather and produced by Academy Museum vice president of education and public engagement Amy Homma, is part of the museum’s ongoing dedication to create programs and exhibitions in partnership with film artists and communities that illuminate the entertainment industry’s past and pave the way for meaningful change in its future.

As “An Evening with Sacheen Littlefeather” is at capacity, the museum will livestream the program on its YouTube channel. The program will be available until Friday, Sept. 23. A standby line will also be available at the museum starting at 2 p.m. on Sept. 17.

In addition, the museum will publish a nearly four-hour visual history of Littlefeather, interviewed by Academy Museum director and president Jacqueline Stewart, following “An Evening with Sacheen Littlefeather.”

The Academy Musuem is located at 6067 Wilshire Blvd.

Dance and sing with the Debbie Allen Dance Academy