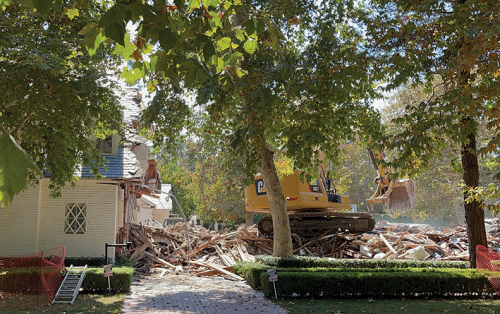 Demolition is well underway on the home at 1001 Roxbury Drive. (photo by Alison Martino)

Demolition has begun on the 1940s-era home located at 1001 Roxbury Drive. The house was the center of a contentious battle between preservation activists and the property’s owner, StubHub co-founder Eric Baker. The City Council deemed in a 4-1 decision on June 21 that the home did not meet the city requirement for historic preservation, which allowed a certificate of ineligibility to be issued to the property owner. Baker plans to build a new home on the site, and he also owns two other properties in the Beverly Hills Flats.

The lone council member to vote “no” when the issue was brought before the council was John Mirisch, who said he felt like the rules that deem a property eligible for preservation status were clearly met by the Roxbury home.

“If I were the L.A. Conservancy giving a report card on the city of Beverly Hills’ preservation efforts, I’d give us an F, and probably an F minus,” Mirisch said, adding that while the current rules “look good on paper,” he questions if they matter when “it makes this kind of result.”

Mirisch said his colleagues on the council felt they were acting within the letter of the current preservation laws, which require, among other things, for the structure to have been included in several architectural magazines.

“It’s not preserving every old building, it’s preserving those that are community defining, and this is one of them because it’s respecting the history of the city, which is only about 108 years old. We don’t have that much history compared to Europe,” Mirisch said.

At the June 21 meeting, the council agreed to review the eligibility requirements.

“The council unanimously agreed that it was important that the current preservation ordinance be relooked at with the Cultural Heritage Commission to see what needs to be updated for the future,” Mayor Lili Bosse said.

“The Cultural Heritage Commission is beginning discussions on potential recommended changes to the code,” Tway said. “Ultimately, any changes would need to be approved by the City Council before they would take effect.”

“We can only hope that the city of Beverly Hills will rework the requirements of what keeps these homes from being demolished,” said Alison Martino, who runs Vintage Los Angeles. “Sadly, they, besides John Mirisch, failed here miserably with this one.”

Martino added that the character of the city is dependent on the council’s future actions in regards to preservation.

“If they don’t [update the code] the city will become completely unrecognizable and all its charm and character will be erased,” Martino said.

Mirisch said that he’s been fighting for historic preservation since he first was elected to the council in 2009. He remembered during his first campaign at a candidate round table with real estate brokers, one of the brokers came up to him and said, “You know, the joke in preservation circles is that preservation Beverly Hills-style is taking a picture of a building before you tear it down.” 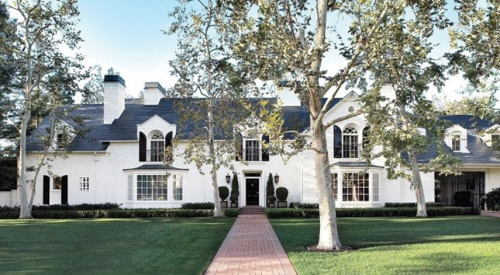 The house at 1001 Roxbury Drive was a staple of Beverly Hills for over 80 years. (photo courtesy of Alison Martino)

“Beverly Hills does preservation like no other place,” L.A. Conservancy senior director of advocacy Adrian Fine said. “They set a very high bar [with] arbitrarily-created criteria [and] no other place in the U.S. operates in this way. If indeed the City Council revisits the way in which they do preservation and determine buildings to be either historic or not, [it could be a positive development]. Because this building should be a wakeup call or shine the light on a fundamental problem with the program as it exists today.”

Mirisch agreed that there is a fundamental problem with how the city determines historical significance.

“We’re back to square one it seems,” Mirisch said. “That’s very sad. Some of the buildings that we lost before, you could argue the Jimmy Stewart House, the Gershwin house and some of the other ones, there was nothing in place to protect it. Now there was, and we as a majority consciously looked the other way and took an absurd interpretation of the rules. You had to bend yourself into all sorts of pretzel like shapes to even try and justify it, to give the applicant what they wanted, instead of protecting what was arguably one of the most beautiful residences. And from my perspective, it’s shameful.”

Vice Mayor Julian Gold and Councilman Lester Friedman, who voted in favor of a certificate of ineligibility for 1001 Roxbury Drive, did not respond to comment by press time.

This is incredibly sad. It’s a shame people don’t have a sense of history anymore. What a beautiful home. I know there are “rules” but as it is said… rules were meant to be broken. At the basic core it seems that if someone had enough money they could repurpose the property. I’ll bet the council wouldn’t say no to a big old pile of money but it’s too late. Sad…

StubHub co-founder Eric Baker. Proving that money can’t buy good taste. Or common sense. Or a sense of decency for that matter.

Shockingly lame! I would expect Beverly Hills to do better.

really sad. it beverly hills used to have a lot of class but money can buy anything but good taste and a sense of style it seems.

Hope everyone got paid off well.