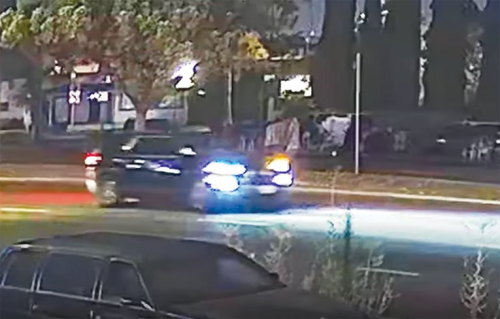 Security cameras captured footage of the SUV that was allegedly involved in the fatal collision. (photo courtesy of the LAPD)

Detectives are searching for a driver who struck and killed a pedestrian in the Wilshire Division in August, and released a video on Sept. 1 that they hope will lead to a suspect.

The collision occurred at approximately 10:10 p.m. on Aug. 15 near the intersection of Venice Boulevard and Orange Drive. Police used security cameras to piece together the sequence of events.

The male pedestrian was walking northbound across Venice Boulevard when he was struck by a dark-colored SUV traveling eastbound. The victim was not in a marked crosswalk, police said.

The SUV driver did not stop or render aid, as required by law. The vehicle was last seen continuing eastbound on Venice Boulevard. Police are also searching for the driver of a second dark-colored SUV traveling behind the first vehicle. Investigators have not determined if the second vehicle was involved in the collision, but believe the occupants may be able to assist with the investigation. The second vehicle also continued eastbound on Venice Boulevard after the collision.

Los Angeles Fire Department paramedics responded and pronounced the 35-year-old pedestrian dead at the scene. The victim’s name was not released. No further description was available of the suspect.

The city of Los Angeles offers rewards of up to $50,000 for information leading to an arrest and conviction in fatal hit-and-run collisions. Motorists must stop and remain at the scene if they are involved in a collision. Police are reminding pedestrians that they should also use caution when crossing streets and should use marked crosswalks.

To view the video, visit youtube.com/watch?v=mwvmXZOMLJ0. Anyone with information about the collision is urged to call detectives with the LAPD’s West Traffic Division at (213)473-0234. During weekends and off-hours, call the LAPD’s hotline at (877)LAPD247.

Thefts of Kia and Hyundai cars driven by social media