Peace and quiet at All Saints’ Church 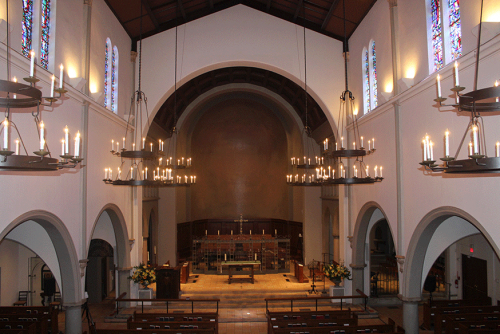 David Davis, who has led some of the major renovations at All Saints’ Church in Beverly Hills after joining the church in the late 1980s, is most proud of his painting above the main altar. (photo by Joey Waldinger)

Born to an architect father and raised in a French-style townhouse, Davis moved from Boston to Los Angeles in 1987 to pursue an architecture career of his own.

Shortly after, while driving down Santa Monica Boulevard in Beverly Hills, All Saints’ Episcopal Church caught his eye.

“The building itself drew me in,” he said.

In the more than three-decades since, Davis has been an active congregant and a major player in its ongoing renovations, using his artist’s background to amplify the sense of wonder he feels when working and praying within its halls.

Since the original chapel was constructed in 1925, the church has grown into a small but dense compound nestled on a quiet corner adjacent to Santa Monica Boulevard, a refuge of prayer just steps from the sparkle of Rodeo Drive.

Since Davis joined the church, its membership has ballooned to about 1,500, a number that includes congregants from all walks of life, he said.

“There is an embracing of everyone who comes here, no matter where they’re from,” Davis said. A building designer, Davis enjoys a wider breadth of work than are afforded to licensed architects.

He is also a trained fine artist, and he approaches his work with an artist’s detailed discernment. He has designed iron crosses for the church, and has affixed the chandeliers in the main chapel so that they shine dappled light on the steps leading up to the altar, replicating the feel of being outdoors.

But his proudest work, he said, is his painting above the main chapel’s altar, a project that he said was epiphanic.

“It was this … intuition, and feelings through my whole person, that I was doing something core to who I was as a person. That I’m not doing something extraneous,” Davis said.

For three months, he concentrated only on the painting, working atop a high scaffolding to which he was not attached. While he worked, people prayed at the scaffolding’s base, he said.

With such an intimate connection to the church, it is hardly a surprise that he can speak about its design and construction in granular detail.

During a recent tour of the building, Davis pointed out the different types of columns supporting the main chapel, which draw from Romanesque influences and allow light to flood the room.

He highlighted details in the stained glass windows etched high into the building, and the layers of concrete poured into the original chapel.

Sitting in a pew in the main chapel, built after World War II, he spoke about the building’s echo and other sonic effects creating a sense of quiet.

He reflected on one of the most important lessons taught to him by Marilyn McCord Adams, a former priest at All Saints’ who became the Regius Professor of Divinity at the University of Oxford and had an indelible impact on his life.

“Spiritual life … all of that comes down to one word,” Davis said. “Quiet. Being quiet before God.”