On the Jewish day of repentance, a reminder of self-love n Anita Moorjani to give her first speech to a Jewish temple on Yom Kippur 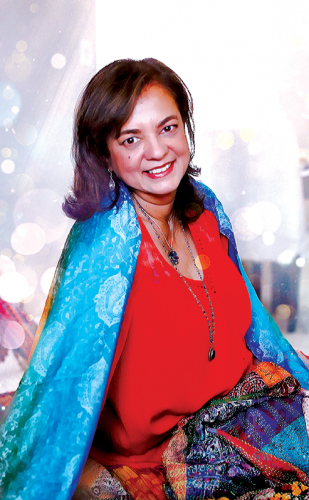 Anita Moorjani has delivered a TedxTalk and appeared on “The Dr. Oz Show,” but on Oct. 5, she will do something new in her more than 10 years as an author and public speaker.

At Beverly Hills Temple of the Arts, Moorjani will share her story with a synagogue audience for the first time as part of the temple’s programming for Yom Kippur, the holiest day on the Jewish calendar.

“It would never have occurred to me that the people of the Jewish faith would be interested in my story, … so it’s an honor that I was invited by [Rabbi David Baron],” she said.

Moorjani’s story is one of survival. In February 2006, Moorjani was admitted to the hospital after struggling with lymphoma for four years, and was told by doctors that she had hours to live.

She fell into a coma, underwent a spiritual journey, and after waking up, was cancer free within weeks, she said.

Moorjani has parlayed this experience and everything it taught her into a thriving career as a speaker and writer, preaching the values of self-love and self-acceptance. It is this message she will bring to the Temple of the Arts on Yom Kippur, a day in which Jews fast while repenting for the sins they’ve committed over the past year.

Moorjani was raised Hindu, a religion in which followers continually atone for their actions and think about how they could do better in order to achieve Nirvana.

But Moorjani’s coma left her with a different viewpoint.

“I realized that before I had this experience, I lived my life from a place of fear of not being good enough,” Moorjani said. “A fear of coming back as a lesser being, a fear of not attaining Nirvana.”

Her coma, however, taught her that people are actually “supposed to relax into our lives,” and that she already is a good person and does not need to act out of a fear of retribution to prove it.

Moorjani did not disagree when asked whether the good feeling people get from doing selfless acts is itself a form of “payback.” She added the caveat, however, that the payback is not fear but joy, which the other person feels as well.

After being in the public eye for so long, Moorjani remains motivated to keep sharing her story after seeing how differently it resonates with various audiences. It is the reactions from her audiences that push her into new creative directions, including writing children’s books. She has co-authored two since 2018, and hopes that these books can teach kids the lessons she learned.

“We live in a reality … that convinces people that they’re not good enough, … that they have to be scared of failing,” Moorjani said. “I grew up like that, and I believe that’s why I got so sick.”

Some have cast doubt on her recovery.

According to a 2007 article in the South China Morning Post, T.K. Chan, an oncologist who treated Moorjani when she was admitted to the hospital, said that doctors drained her lungs and administered chemotherapy, which Moorjani had refused for more than three years.  It is most likely these medical interventions that saved her life, Chan reportedly said.

In a Sept. 27 email, Moorjani explained that she had initially refused chemo after witnessing its detrimental effects on other people in her life. When she was “in the final stages of death,” the doctors were wary of administering chemo because she was so weak, but decided to anyway because they had no other options, Moorjani added.

Her tumors shrunk within days, “and the doctors were baffled,” she said, adding that she was having her lungs drained regularly for about a year leading up to the coma.

She claimed that Chan initially said that her recovery was not possible through medicine alone, but later “changed his story when interviewed by the press.”

Moorjani said that her ability to describe what happened in the room while she was under the coma confounded doctors, and that the experience gave her answers to questions she had had her entire life.

“I was aware of everything that was happening around me, but I was also aware of more. I was aware of why I was here, and why did I exist. And certain existential questions that I always had seemed to be answered in that state.”