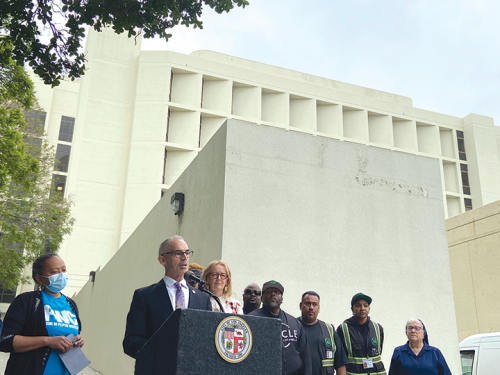 After O’Farrell held a press conference in June to urge Dr. Patrick Soon-Shiong – the billionaire owner of St. Vincent – to turn the building into an acute care center for unhoused people, the Los Angeles Times, which is owned by Soon-Shiong, reported that he is looking “forward to the opportunity to discuss this in-depth with members of the City Council.”

With Soon-Shiong still refusing to meet with O’Farrell while renting the building out for film shoots, the councilman renewed his push last week with an Instagram video calling out Soon-Shiong for his inaction.

“[Soon-Shiong] has proceeded to stonewall us since making that public statement, and we believe he should be held accountable,” O’Farrell said.

With space for 366 beds and a nurse station on every floor, O’Farrell said the building could easily provide acute care for hundreds of unhoused people. City, county and state officials are eager to work with Soon-Shiong to fulfill this vision, including by entering into a long-term lease, O’Farrell said.

He added that similar agreements have worked in the past, noting that the state paid Soon-Shiong approximately $30 million in 2020 to provide care for COVID-19 patients for three months.

“I would not expect this to be anything other than cost neutral for him,” O’Farrell added.

But despite O’Farrell’s ongoing public campaign and the support of city and county officials, efforts to bring Soon-Shiong to the table have fallen flat.

In January 2020, O’Farrell introduced a motion to transform the hospital, then on the verge of closure, into a facility providing “wraparound services including substance abuse assistance, rehabilitation services and interim/permanent housing on site.”

While this motion garnered significant public support, three months later, at the onset of the pandemic, the state decided to turn it into a COVID-19 treatment facility instead.

After Soon-Shiong purchased the building in April 2020, O’Farrell continued to try and work out a compromise.

He introduced a new motion in September 2020 to coordinate efforts between the city and Soon-Shiong to use the hospital for medical and mental health services, according to a June 15 timeline on O’Farrell’s Instagram page.

In June 2021, after almost a year without a response from Soon-Shiong, O’Farrell requested a meeting with his team, and his staff again tried to broker a meeting. But still the councilman has been unsuccessful.

While O’Farrell’s staff have been communicating with officials from Soon-Shiong’s foundation to set up a meeting, “We haven’t been able to break through beyond that,” he said.

Philip Sokoloski, vice president of integrated communications at FilmLA, said the medical center has been used three times for film shoots over the past two months. The most recent production to be filmed there was “Fatal Attraction” by Paramount Television Studios, which was shooting at the property last week, Sokoloski said.

“He’s not a bad man,” O’Farrell said of Soon-Shiong. “But what I want is for him to realize that he could play a large role, being the city’s wealthiest person, … [and] owning a newspaper that talks about the homelessness crisis on a daily basis.”

Emails to Soon-Shiong’s company NantWorks and to the Los Angeles Times were not returned.