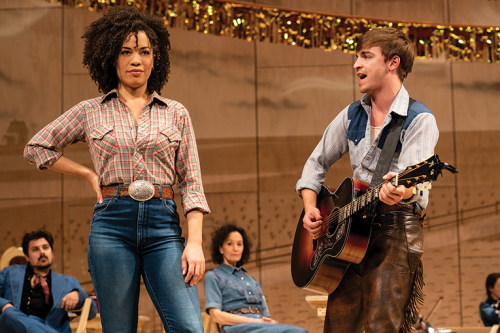 Sasha Hutchings and Sean Grandillo play Laurey and Curly in the touring production of “Oklahoma!,” at the Ahamnson through Oct. 16. (photo by Matthew Murphy and Even Zimmerman, MurphyMade)

This ain’t your Aunt Eller’s “Oklahoma!”

Arguably the most important musical in theatrical history, “Oklahoma!” premiered nearly 80 years ago, the first brainchild of a litter by Richard Rodgers and Oscar Hammerstein II. It smashed all then-Broadway records at the time, running over 2,000 performances and launching several successful national tours.

It was also the first Rodgers and Hammerstein production adapted for the big screen, with the Oscar-winning 1955 film starring Gordon McCrea, Shirley Jones, Rod Steiger and Gloria Grahame. The music is so engrained in popular culture that the state of Oklahoma adopted the musical’s title tune as its official song. “Oh What a Beautiful Mornin,’” and “People Will Say We’re In Love” are standards. It is one of the most-performed high school and college musicals, with its book (relatively) family friendly.

To put it simply, “Oklahoma!” was and has largely remained a big deal. It’s one of those things people know even when they don’t know they know it.

In 2019, a stripped-down, reimagined production launched on Broadway, winning Tony Awards for Best Revival and Best Featured Actress in a Musical (for Ali Stroker, the first user of a wheelchair to win the award). This version took the more rough-and-tumble aspects of the story and presented them with a darker tone, and now that version is on tour, playing at the Ahmanson through Oct. 16.

Set in the Oklahoma Territory in 1906, the story concerns Laurey (Sasha Hutchings), who has a love-hate flirtation with cowboy Curly (Sean Grandillo) and is being pursued by the sinister, or maybe misunderstood, Jud (Christopher Bannow), who is a ranch hand for Laurey’s Aunt Eller (Barbara Walsh). There is also a side story with Ado Annie (Sis) and her complicated love life. Sis, the first Black, trans actress to take on the role, gets the show’s funniest tune, “I Can’t Say No,” which she performs to memorable, hilarious effect in the first act. The show, perhaps infamously “lily white” in previous incarnations, cast diverse performers for many of its roles, which lends depth to the production’s central message … more on that in a minute. The costuming is largely contemporary style, as well.

The edgy, social message-tone is perhaps in greater keeping with the play the musical was based on, “Green Grow the Lilacs,” first performed in 1931 and written by Lynn Riggs, which was, apparently, decidedly more downbeat than the musical it spawned.

This production uses a sparse Town Hall set for virtually all of the action, with the entire company often on stage even during two-person scenes. At specific points, the theater goes totally dark, adding an ominous edge to forboding scenes, and a hand-held camera projection is used to distorting effect. The show, as it has in each incarnation, opens the second act with a long dream ballet, which is presented with contemporary, interpretive dance and heavy strobe lighting.

I don’t know how to talk about the rest of this without spoiling the ending, so if you don’t want to know, you should stop reading right now. That’s your warning.

It is odd to think about how light-hearted so many previous adaptations of “Oklahoma!” seem, considering that, in the play as written and previously performed, Jud dies in a climatic showdown in a clear act of self-defense (it’s an accident in the movie). The town puts on a mock trial so Laurey and Curly can make off in their “Surrey With the Fringe on Top” and have a proper wedding night.

A darker version of the show did perform on the West End in 1999 with Hugh Jackmann and was transferred to Broadway in 2002. I have not seen this version, but by all accounts, it does not go where this “Oklahoma!” goes.

In that climatic showdown now, Jud brings a gun as a present to Laurey and Curly’s wedding. He doesn’t get violent. Jud simply puts the gun in Curly’s hand, silently begging for Curly to shoot him.

In case the audience gasp didn’t communicate what happened, a large splattering of blood douses Laurey and Curly.

The mock trial continues with a lawless tinge, monotone and haunting. A clearly guilty man is let off for the murder of a man the rest of the town didn’t like anyway.

The play ends with a reprise of that rollicking title song, with most of the cast seemingly joyful as life beckons on … except blood-covered Laurey, who screams out the lyrics in agony.

And that’s how it ends. 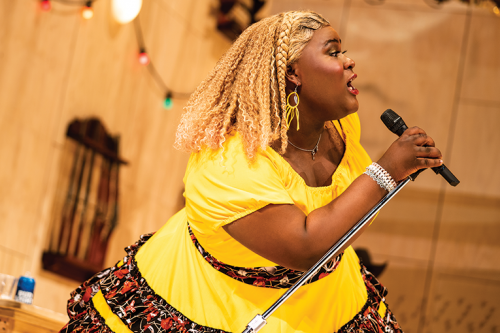 Sis is the first Black, trans actress to take on the role of Ado Annie in “Oklahoma!” (photo by Matthew Murphy and Even Zimmerman, MurphyMade)

The opening night audience gave a standing ovation, but then immediately walked out of the theater in a daze, hit unexpectedly with a message against vigilante justice. There are many questions left, too, on what drives Jud to his more extreme behaviors … is he crazy? Does Curly drive him crazy? Do people not like him because he’s weird? Why does he act out?

It’s a confusing message because he most certainly assaults Laurey in the play’s second act, and yet … at that fateful wedding, when Jud asks to kiss the bride, Curly allows it and Laurey kisses Jud back. What?

But we are supposed to ask, “What?”

This is a production that lives decidedly in the gray and wants its audience to think on each question, presenting a cross-section of modern, everyday people in a story about a time nearly a century ago and asking us to consider what these events would look like under today’s lens.

And quite honestly, it doesn’t look pretty. But man is it a memorable show … anew.

For tickets and information, visit centertheatregroup.org/tickets/ahmanson-theatre/2021/oklahoma. The Ahmanson Theatre at the Music Center is located at 135 N. Grand Ave.

On the Jewish day of repentance, a reminder of self-love n Anita Moorjani to give her first speech to a Jewish temple on Yom Kippur