The Mid City West Neighborhood Council’s General Board approved a proposed plan on Sept. 13 that will transform the Television City campus at Beverly Boulevard and Fairfax Avenue.

During a virtual meeting, the council’s general board heard presentations from Hackman Capital Partners, owner of Television City and developer of the proposed project, as well as public comment before voting 20-5, with two abstentions and two recusals, to support the project. The board’s vote is non-binding, and serves as a recommendation to the Los Angeles City Council.

Known as the TVC 2050 project, the proposal seeks to expand facilities within the 25-acre Television City property. It would create 1,874,000 square feet of sound stages, production support space, office space and retail space on the site.

The existing main central building and façade on the Television City campus, which are designated as a city of Los Angeles Cultural-Historic monument, will be preserved, and the studio’s frontage on Beverly Boulevard will be opened so the public can see the historic elements from the street. The project is currently in the draft environmental impact report phase, and must still go before the city’s Planning Commission and the City Council’s Planning and Land Use Management Committee, as well as the full City Council.

Zach Sokoloff, vice president for Hackman Capital Partners, said he was grateful for the neighborhood council’s support and stressed that the entitlement process will continue, giving the public many additional chances to consider and weigh-in on the project. Sokoloff also stressed that Hackman Capital Partners plans to continue working with the community to ensure there is support for the project. The Mid City West Neighborhood Council’s Planning and Land Use Committee previously held two community meetings on the project and voted to support it before the general board voted on Sept. 13.

“We’ve done a lot to demonstrate the merits of the project and what kind of long-term stakeholder we are in the community,” Sokoloff said. “Every opportunity that we have to talk about the project and talk about its benefits, not only the jobs and the economic output of a project of this scale, but really the improvements to the community … it’s really a privilege.” 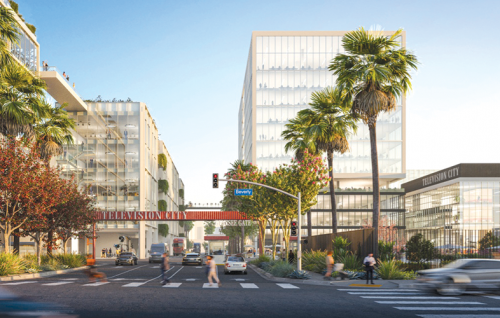 The TVC 2050 project calls for multiple buildings of different heights and sizes near the corner of Beverly Boulevard and Fairfax Avenue. (rendering courtesy of Hackman Capital Partners)

Opposition to the project surfaced in early August when a group called the Beverly Fairfax Community Alliance launched a website outlining concerns about TVC 2050. The alliance is comprised of The Grove, which is owned by Los Angeles mayoral candidate Rick Caruso, and the A.F. Gilmore Company, owner of the Original Farmers Market, as well as AIR Communities, which owns the Broadcast Center Apartments, Palazzo East and Palazzo West apartments along Third Street, and the Beverly Wilshire Homes Association. The alliance sent letters to residents outlining purported negative impacts the TVC 2050 project will have on the community. One of the main points of contention is a request that the property be designated as a regional job center, like Century City or Downtown Los Angeles, for the television production industry.

At the Sept. 13 meeting, approximately 30 callers spoke about the project, with 16 in support and 13 voicing opposition. Those who support the project cited benefits including jobs creation and economic development, and preservation of historic elements of the Television City property. Opponents mainly cited potential traffic and parking impacts the project would create, while some believe the project is too large and out of character with the surrounding community.

Representatives of the Beverly Fairfax Community Alliance did not voice opposition at the Sept. 13 meeting. Following the neighborhood council’s approval, the alliance further outlined its position.

“Tuesday’s meeting saw many community members actively engaged in the conversation surrounding the Television City 2050 project,” read a statement by the Beverly Fairfax Community Alliance. “Unfortunately, the Mid City West Board limited public comment to 30 minutes. This prevented more than 150 Beverly Fairfax residents from voicing their opinion on the project, which would be twice as big and tall as the Beverly Center, overwhelm the community and would cause traffic gridlock to already congested streets. They also denied requests from many neighborhood council board members and residents to postpone the vote until the developer addressed the concerns of the community and a final EIR was circulated. We do not believe the neighborhood council adequately responded to the concerns of the community.”

The discussion on the TVC project lasted approximately three-and-a-half hours and the public comment period ran approximately 80 minutes. The Mid City West General Board meeting was recorded and will be posted at midcitywest.org.

As someone who grew up in the newspaper business and has worked on and off in journalism their whole life, I am very sorry to see such terrible reporting. First of all, the reporter contradicts himself. Were there 30 minutes of public comment or 80? Why say approximately thirty callers and then state that 16 were pro the development and 13 against. That’s an exact number and it isn’t thirty. The approximately 30 makes it seem like the reporter wasn’t keeping close track, which makes his report of 13 and 16 seem unreliable. I attended the meeting and I don’t believe these numbers are correct. I also completely disagree with the statements of what those who were pro and against were supporting/finding objection to. There were many callers who had objections to the DEIR and the lack of information in the specific plan. These callers all believed that a vote should not be taken until there is additional information. A member of the Mid City Board reiterated these statements and made a motion to defer the vote. Yet there was no opportunity for a second. (Keep in mind that all board members were muted by the host.)T These to me are key bits of information on what transpired at the meeting. These glaring omissions make me wonder if the reporter actually attended the meeting or simply received a recap, perhaps from a Mid City board member (possibly with a bias) after the fact.