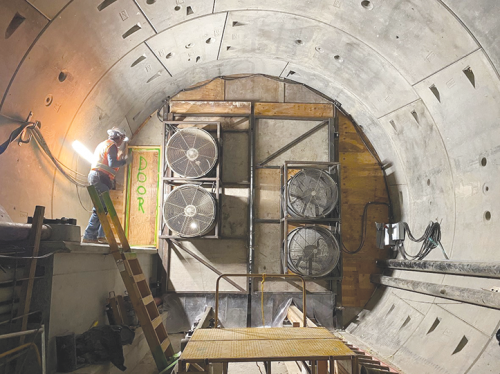 Ventilation in the tunnels is essential, so mechanical doors holding fans are placed throughout the tunnels to help with air circulation. (photo courtesy of Metro)

Learn about progress on the Purple Line Extension subway project during an in-person meeting on Wednesday, Sept. 7, from 6-7 p.m. at Beverly Hills City Hall, 455 N. Rexford Drive. Metro staff will provide updates on the future Wilshire/La Cienega and Wilshire/Rodeo subway stations in Beverly Hills. The meeting is part of a series of monthly updates on the subway project.

Weekend closures of Wilshire Boulevard that were supposed to begin in September for street restoration work around the Wilshire/Fairfax station have been temporarily postponed. Metro will provide future notices when the work has been rescheduled.

At Wilshire/La Brea, crews are building the station entrance and are repairing curbs and gutters on Wilshire Boulevard. The work is expected to continue through early November, and Wilshire Boulevard has been reduced to two lanes in each direction between Orange Drive and Detroit Street.

At Wilshire/La Cienega, work is occurring in staging yards and at street level behind k-rail barriers. Backfill operations will begin at the Wilshire/La Cienega station in September. From 8 p.m.-6 a.m., Wilshire Boulevard will be reduced to a single lane in each direction between La Cienega and San Vicente boulevards. The work is anticipated to take 10-12 months.

Crews have also been completing ground improvement work near the future Wilshire/Rodeo station, and are working underground through at least 2024. Material, equipment and concrete deliveries will continue daily. Lanes on Wilshire Boulevard may be intermittently reduced from three to one lane between El Camino and Crescent drives.

Near the future Westwood/VA Hospital subway station, crews will drill and install instruments on Bonsall Avenue from Sept. 1-2, and Sept. 6-8, from 7 a.m.-4 p.m.

WeHo council forum should have been televised