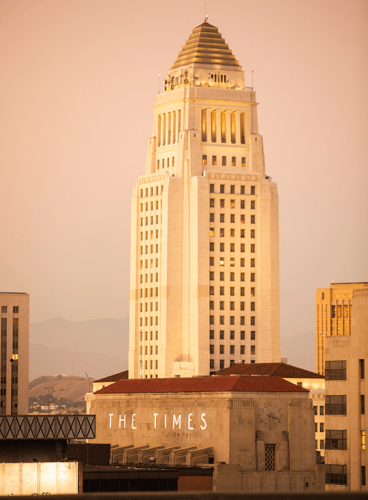 Los Angeles City Hall is one of the city’s defining architectural landmarks. (photo by Andy Kitchen)

“City Hall is a temple of the people, and I feel like I’m working in a sacred place,” O’- Farrell said.

“The cathedral that is the Council Chamber can be an exalted place, and it always inspires me to do my best on behalf of others,” he added.

Since its completion in 1928, City Hall remains one of Los Angeles’ defining landmarks, a “Modern American” masterpiece towering over Downtown, according to the Los Angeles Conservancy.

Many of the building’s elements recall classical or Art Deco design, especially the tower topped by a steep pyramid.

Nonetheless, “City Hall was designed to correspond to no specific previous era or style, but rather to incorporate many different elements to produce a unique hybrid,” the Conservancy states.

Additionally, the interior design of the building, done by Austin Whittlesey, “associates [L.A.] with great cities of the world” like Alexandria, Florence, and Paris, while nodding to the city’s booming industries of the period: Film, automobiles, and aviation.

After surviving almost a century of general wear and tear and several earthquakes, – including one in 1994 that left it shuttered for five years – the building was showing its age.

Project Restore, a non-profit organization dedicated to preserving and restoring historic buildings in L.A., played a major role in many of the building’s renovations.

The organization cleaned the billowing red drapes hanging from the roof of the observation tower and restored the marble and metalwork adorning the building’s main lobby, helping beautify the building while restoring its old-world charms.

Once, after finding a historic aircraft guidance light in a City Hall storage basement, Project Restore staff rewired the beacon to meet current standards and reinstalled it.

But, over the years, some of the work done on the building has been far from cosmetic.

Between 1997 and 2001, the building underwent a complete seismic retrofit to ensure it would remain stable during earthquakes.

By the end of the three year project, the project team led by Clark Construction had added 30,000 cubic yards of concrete, 3,000 tons of structural steel, 5,000 tons of reinforcing steel and an additional 68,467 million pounds of dead weight, ensuring the building could withstand a magnitude 8.2 earthquake.

According to Clark’s website, their team “restored this iconic building to its original Art Deco grandeur and ensured state-of-the-art systems would offer protection from future earthquakes.” The work undertaken by firms and organizations like Project Restore and Clark to maintain the building show that it is much more than a place of governmental business; It is also a storied historical landmark and an iconic backdrop for film and television.

Phil Sokoloski is the Vice President of Integrated Communications for FilmLA, the non-profit that coordinates on-location filming in L.A.

Although the pandemic has slowed the amount of filming, Sokoloski said that the building remains a captivating shooting location.

“Its architecture, and particularly its Spring Street entrance and grand rotunda, have helped City Hall stand out as a visually striking location in scores of television productions and feature films,” Sokoloski said.

She recalled how her husband would drive around the city with her and their children, reminding them that for years, no buildings were allowed to be taller than city hall.

“For a time it was the tallest building,” LaBonge said, adding that “now it’s just dwarfed by the rest of the city.”

Still, her husband’s love for the building was so strong that it sometimes drove him to dangerous heights, she said.

“Tom always liked to ring the bell at the top of the tower,” she said. “He would step out onto the railing, and risked his life to reach the bell and ring it.”

Peace and quiet at All Saints' Church