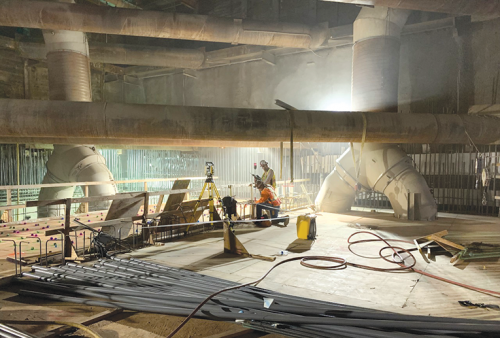 The Los Angeles County Transportation Authority is advising about upcoming work on the Purple Line Extension Subway Project. Crews are working at numerous locations between the Wilshire/Western and Westwood/VA Hospital subway stations. Construction is occurring underground in the tunnels and stations, and above ground in staging areas and street-level work zones.

Metro is advising about weekend closures of Wilshire Boulevard near Fairfax Avenue that will begin on Friday, Oct. 7. The closures are necessary for decking removal and street restoration work around the future Wilshire/Fairfax subway station. Metro anticipates 13 consecutive weekends of closures from 9 p.m. on Friday to 6 a.m. on Monday each weekend. Detours will be in place and Metro will provide further information in future construction notices.

At Wilshire/La Cienega, where another subway station will be located, crews are working underground and in construction staging areas. Backfill operations have begun in the area, with crews placing dirt, slurry and utilities in a 16 to 20-foot space between the top of the station’s roof and the street surface. The process is necessary before decking is removed. The work will occur on Saturdays from 6 a.m.-6 p.m. Wilshire Boulevard will be reduced to a single lane in each direction between Le Doux Road and San Vicente Boulevard during the work, which is anticipated to last for 10-12 months.

Near the Wilshire/Rodeo station, ground improvement and cross passage work is ongoing. Crews have been completing ground improvement work and will be working underground through at least 2024. Lanes on Wilshire Boulevard may be intermittently reduced from three to one lane between El Camino and Crescent drives.

Utility work is also occurring along Wilshire Boulevard between Camden and Rodeo drives, and is expected to take two to four weeks. Anticipated work hours will be 8 a.m.-11 p.m., Monday through Friday, but closures will remain in place 24 hours.

Farther west, crews are working at the future Westwood/UCLA and Westwood/VA Hospital stations. Decking for the Westwood/UCLA station is occurring on Wilshire Boulevard between Veteran and Gayley avenues.

Kudos to the Beverly Press