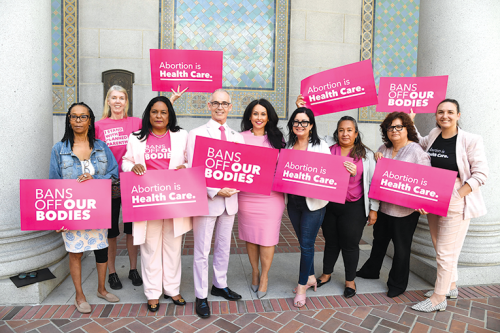 L.A. City Council’s Nury Martinez, center, and Mitch O’Farrell were joined by supporters of Proposition 1 at City Hall. (photo courtesy of the city of Los Angeles)

“Abortion must be protected in this country and failing to do so denies women the equality we all deserve,” Martinez said.

“Californians are unwilling to treat women as less than [equal], and here in Los Angeles, we have been consistent in our commitment to protecting the right to a safe and legal abortion. No one should be forced to care for a child because their state’s legislators want to push personal beliefs onto women in their state.”

Proposition 1 will add the right to an abortion to the California State Constitution, establishing a right to reproductive freedom, among other protections. It would prohibit the state from denying or interfering with personal choices related to reproductive care. It will declare that individuals have a fundamental right to choose to have an abortion and to use or refuse contraceptives.

“This is more than a war against women and bodily autonomy. They’re coming after us next. In the LGBTQ+ community, we have fought for decades and won marriage equality and personal privacy rights,” O’Farrell said. “This extreme U.S. Supreme Court has signaled to radical right wing state legislatures and governors across the country that our fundamental rights can and will be taken away. It is absolutely necessary to enshrine reproductive freedom in our California State Constitution.

Beverly Hills council gives a shout out to WEST

Disruptions to mail service not limited to WeHo