Honoring the queen at Tam O’Shanter 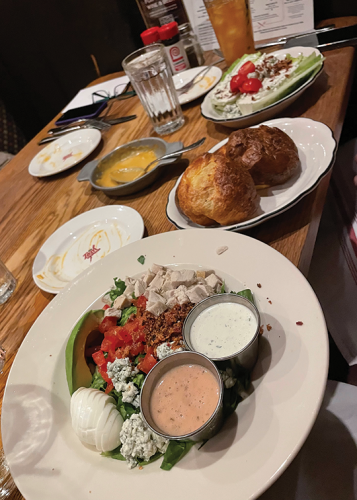 In honor of Queen Elizabeth, my friends and I went to a celebratory lunch at the Tam O’Shanter to mark her passing at age 96.

The legendary steakhouse and a Scottish pub is one of the most charming Tudor-style buildings in Los Angeles. It’s been in our city since before Queen Elizabeth was born, now celebrating its 100th anniversary, and is one of the oldest restaurants in L.A. that is operated by the same family in the same location.

The bright red London-style phone booth near the entrance oozes with charm. An extensive collection of Scottish items decorates the interior walls, along with charming stained glass windows.

The friendly host led us into the dining room to the “Disney table.” A brass plaque on the table was etched with, “This was a favorite spot of Disney and his imagineers.”

In the 1920s, Lawrence Frank and his brother-in-law Walter Van de Kamp collaborated to start a few businesses together. Since Frank was friends with Walt Disney, he asked Disney and Hollywood art director Harry Oliver to help design the look and feel of the restaurant. Disney lived nearby in Los Feliz, and Tam O’Shanter became one of his go-to favorite restaurants.

We started our Tam O’Shanter adventure with one of the items in the Odds & Sods section on the menu, a Scotch Rarebit. This authentic Scottish recipe, similar to a cheese fondue, combines melted sharp cheddar cheese mixed with Belhaven Scottish ale and a generous (almost too generous) dash of cayenne pepper. We cut the two thick slices of toasted sourdough bread in half to dip into the luscious, creamy and comforting dip.

Other traditional fare that the queen might have enjoyed eating during her reign includes Toad In The Hole made with diced filet of beef, chopped carrots and onions, a little kale and some Guinness gravy. It’s served with a side salad. Heartier fare includes platters of brisket, roast turkey, corned beef or pork roast that are served with mashed potatoes and creamed corn or creamed spinach.

One of my friends ordered the Atwater Wedge, which is served on a long plate with sliced heads of romaine lettuce topped with crispy crumbled bacon, cut sweet cherry tomatoes and a handful of blue cheese crumbles.

I debated between the summer melon salad with compressed melon, ricotta salata and a lime dressing or a turkey Cobb. I chose the latter and was delighted that the large bowl was filled with chopped crisp romaine lettuce and just the right amount of blue cheese, plus cubes of roasted turkey, slices of hard-boiled egg, crumbled crisp bacon, slices of avocado and a house vinaigrette dressing. We asked for a side of Yorkshire pudding the Tam makes theirs with beef drippings. I liked how it was a little crisp on the outside, yet warm, softer and airy inside.

My other friend ordered the California-cut of Lawry’s famous prime rib. It’s a smaller portion that is ideal for lighter appetites during lunch. Sliced thin, my friend said the beef was very tender and flavorful and enhanced it with the side of fresh, creamy horseradish for a kick. She also had mashed potatoes and gravy, creamed spinach and Yorkshire pudding.

At the end of our meal, our server brought out an ethereal strawberry trifle with a lit candle on top. It was the perfect ending to toast to the queen.

Now through Sept. 23, steak lovers can enjoy a special three-course menu for $62 a person. Start with a classic Caesar or Atwater Wedge salad, before selecting an entrée. One is a certified Angus beef roasted prime rib of beef with Idaho mashed potatoes, one Yorkshire pudding and a choice of creamed spinach or creamed corn. The other is a six-ounce pan-roasted filet mignon served with rustic ratatouille and crushed fingerling potatoes. Finish with C.C. Brown’s hot fudge sundae or an English trifle.

In the 1930s, Tam O’Shanter was one of the first restaurants in Los Angeles to have carhops, and on Sept. 23 the premier all-female Derby Dolls will entertain diners on their roller skates delivering food to cars. The festivities include bar service, music, a DJ and giveaways. A special menu includes sandwiches, salads and sides, prime rib and fish n’ chips. The Derby Dolls will deliver the orders on skates to each car or guests can grab a table in the parking lot to enjoy their meal. To incorporate the Derby Dolls vibe, there will be temporary tattoos and a chance to get your very own derby name from the Derby Dolls. A satellite bar in the parking lot will serve a specialty cocktail for $15 each with a portion of the proceeds benefiting the Derby Dolls organization. It’s a light Irish whiskey with a house-made mint syrup with sweet summer stone fruit, plus bitter herbal Italian Amaro to create “a different kind of Derby.” Reserve your 5:30-7:30 p.m., carhop spot for $25, and the deposit amount will be used as a credit on your food order. Space is limited and reservations are required. lawry sonline.com/tam-o-shanter/happenings/derby-dolls-car-hop. $$-$$$ 2980 Los Feliz Blvd., (323)664-0228.

Find your next delightful binge with ‘Abbott Elementary’