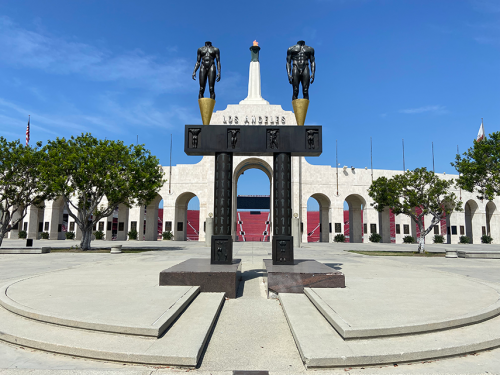 After traveling across the globe, from Olympia and Athens Greece, the Olympic torch arrived in the United States on May 8, 1984, where it began its journey across the country igniting civic pride along the way. Its ultimate destination was the venerable Los Angeles Memorial Coliseum with decathlete Rafer Johnson running up the last 99 steps, lighting the Olympic flame and kicking off the 1984 Olympic Games in Los Angeles with the entire world watching.

Next year, the Coliseum will proudly celebrate its 100th anniversary, marking a century of memorable moments. In 2028, the Olympic Games will return to Los Angeles, and the Coliseum will become the only venue in the world to host the world’s most prestigious sporting event three times. The opening and closing ceremonies will be held in the stadium, and the Olympic flame will burn bright once again over the City of Angels.

The Los Angeles Memorial Coliseum has also hosted a multitude of other memorable sporting events. In addition to the 1932 and 1984 Olympic Games, it hosted the first Super Bowl in 1967 and again in 1973 and a World Series in 1959. Since opening in 1923, it has served as the home of USC Trojan football, and was also home to the UCLA Bruins from 1933-81. The Los Angeles Rams played in the Coliseum from 1946-79 and 2016-19, and the Los Angeles Raiders called the stadium home from 1982-94. The Chargers played a season there in 1960. The venue was also home to the Los Angeles Dodgers from 1958-61 after the team moved from Brooklyn and Dodger Stadium was under construction. 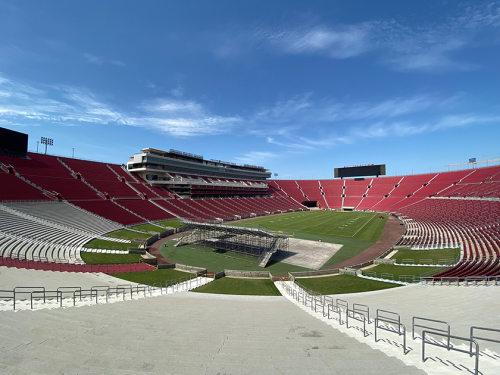 The Los Angeles Memorial Coliseum also has a special place in political history. John F. Kennedy accepted the Democratic Party’s nomination for president in 1960 at the Coliseum. South African president and anti-apartheid activist Nelson Mandela addressed a sold-out crowd there on June 29, 1990, after 27 years of political imprisonment.

Religious leaders have made notable visits to the Coliseum. Rev. Billy Graham attracted over 900,000 people to the venue from Aug. 15-Sept. 8, 1963, and Pope John Paul II held the first papal mass in California at the Coliseum on Sept. 15, 1987. 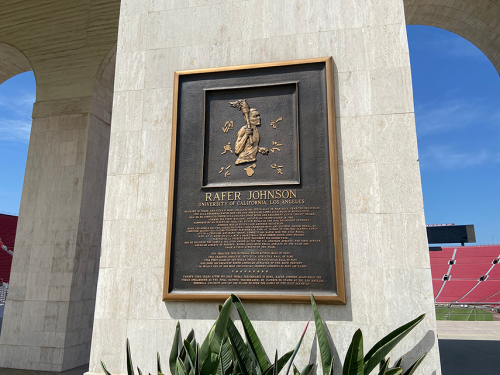 Those historic moments are honored and celebrated in the Coliseum’s Court of Honor, located on the columns of the peristyle under the Olympic flame. To understand the iconic venue and the people and events that shaped it, take a stroll through the archways – which were modeled after the original Roman Colosseum.

“The Coliseum itself opened in May of 1923, and the Court of Honor was created 10 years later to document the founding fathers. You’ll see Judge Willian Bowen (known as the founder of Exposition Park) and William May Garland (credited with bringing the Olympics to Los Angeles in 1932), the founding fathers, if you will, for this structure. In ‘23, Los Angeles didn’t really have any kind of place like this. L.A. wanted to be a major player and they needed something like this stadium. Over the years the Coliseum grew into what it is today, and there is a lot of history that happened along the way that you can see here,” said Al Naipo, chief administrative officer and secretary for the Los Angeles Memorial Coliseum Commission. 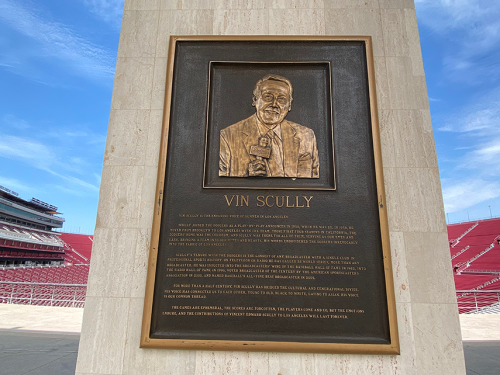 The Dodgers, Jackie Robinson, Walter O’Malley and the indomitable Vin Scully are all enshrined in the Court of Honor at the Los Angeles Memorial Coliseum. (photo by Edwin Folven)

From professional football, NFL commissioner Pete Rozelle is represented, as are the Rams. 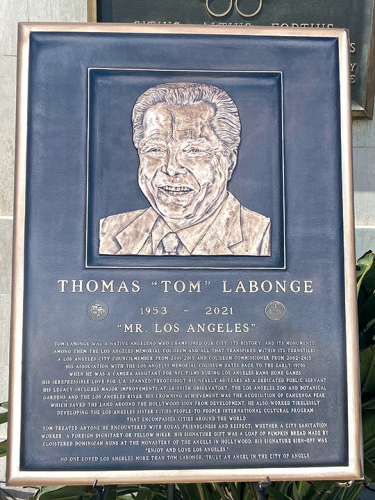 Former Los Angeles City Councilman Tom LaBonge was inducted in the Court of Honor on April 14, 2022. (photo by Edwin Folven)

Visitors may be surprised to see a bronze plaque featuring musician Bruce Springsteen and the E Street Band, who frequently played the Coliseum and the Los Angeles Sports Arena next door. This fall, plans call for Peter Ueberroth, who helped bring the Olympic Games to Los Angeles in 1984, and NFL Hall of Famer Mike Haynes, a Los Angeles native who played for the Raiders from 1983-89, to be enshrined in the Court of Honor.

Just as the Court of Honor is evolving, so is the Coliseum itself, which is primed for an exciting future. Extensive renovations were completed in 2019 and the stadium continues to be home to USC Trojan football. Preparations are already underway for the return of the Olympics to Los Angeles in 2028. 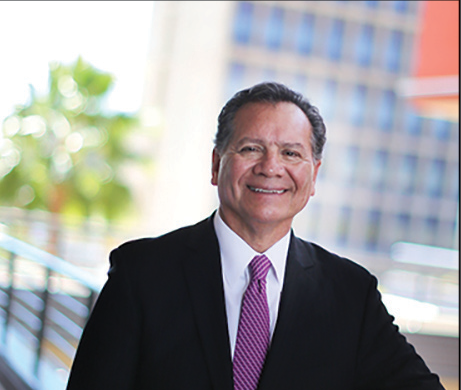 “The return of the Olympics speaks to what the Coliseum is about, what the history is, what the venue represents,” said George Pla, president of the Los Angeles Memorial Coliseum Commission. “A lot of people think 2028 is a long time away, it’s not. There is a lot of organizing and planning for the Olympics going on right now.”

For the Coliseum’s 100th anniversary next year, Naipo said a major celebration is in the works with special events and interactive exhibits on the stadium’s history. 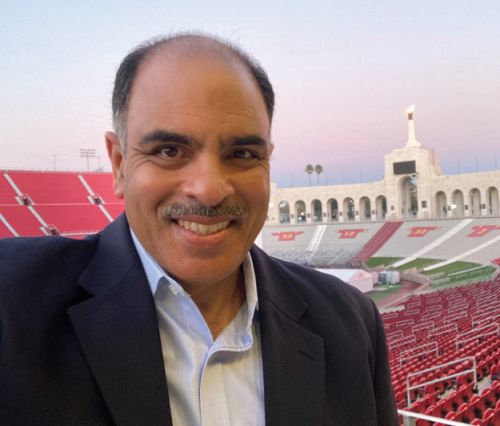 The public can visit the Coliseum and its Court of Honor from 10 a.m. to 5 p.m. during weekdays, with access via Gate 29.

“People will have an opportunity just to come in. They can look at the Court of Honor, they can actually come in and sit down, have their lunch and kind of walk around part of the grounds,” Naipo added. “That’s all a part of the commission’s duty, to engage with the public, and this is a public place. It’s just a continuing legacy. When you think about the words ‘historic’ and ‘legacy,’ that’s what the Coliseum is. It’s our job as the commission to make sure that goes on forever.”