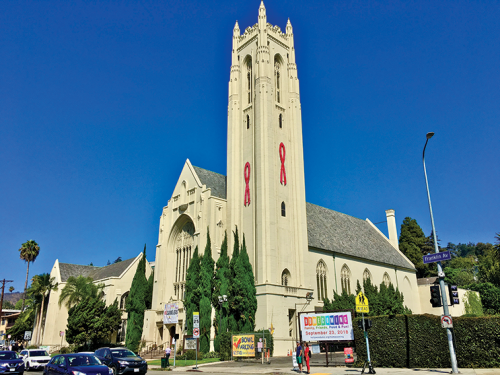 Hollywood United Methodist Church has had its “ribbons of hope” adorning the sides of its tower since 1993. (photo courtesy of Devon Michael Jones)

At the corner of Highland and Franklin Avenues in the heart of Hollywood sits a church that director of communications Devon Michael Jones calls “a beacon of hope” for the surrounding community.

The building, designed by Thomas P. Barber in the English Gothic style of Westminster Hall in London, broke ground in 1927. The congregation was founded in 1909, and it celebrated its 113th annual “homecoming” service in September. But beyond the grand architecture of the structure, with its large stained-glassed windows, serene courtyard and high-ceiling sanctuary, are two red ribbons affixed to the imposing belltower.

The ribbons were placed in 1993, at the height of the AIDS epidemic. At the time, nearly 30 years ago, many congregations, including many within the United Methodist Church, were unaccepting of people in the LGBTQ+ community. But the Hollywood congregation only saw the humanity of those afflicted. It even hosted the funeral of Pedro Zamora, the “Real World” star who died from the disease in 1994.

“[We] lost members over this,” Jones said. “You got to realize that it wasn’t the most popular thing to do. But they wanted to be a beacon of hope … for people that needed a church to come to and a lot of people with HIV found their last days of hope [here].”

A plaque in the church’s entryway is dedicated to the members who lost their battle with HIV/AIDS. The congregation continues to be an advocate for those living with the disease, as well as a regular attendee at community LGBTQ+ events. In recent years, it has had both a lesbian associate pastor and transgender and gay pastoral interns, all controversial within the larger denomination.

The church has been progressive since the beginning. The stained-glass windows on either side of the sanctuary showcase 24 Biblical characters, 12 women and 12 men.

Perhaps the most noticeable feature of the sanctuary, however, is the large pipe organ, which encompasses the entire building.

“It’s not just a pipe organ. There is air blown from the basement to all four corners of the building because the building has wood and pipes and bells and all sorts of things all over. The entire building is actually the organ,” Jones said.

Climb aboard the comfort bus