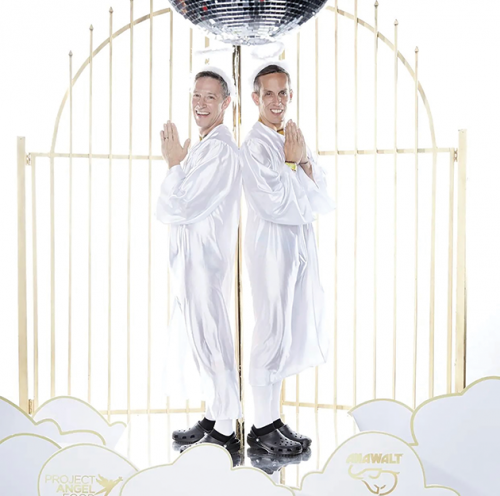 Fred and Jason Arens went on their first date on January 15, 2005. Six months later, they closed on a craftsman home located near the Hollywood sign. Renovations were necessary, and it took a full nine months before the couple could move into the house. Even then, they were not yet able to afford the finishing touches, so the space was littered with raw materials. But that didn’t stop them from throwing their first Halloween party in October 2006.

“It was actually the perfect place to just throw a crazy haunted house kind of party. It was all drywall and fill paint,” Jason said. “We literally painted neon colors all over the walls, [we] had black lights, and it was wild.”

They were both relatively new to the city, Jason having moved from his native Hailfax, Nova Scotia, and Fred hailing from Riverside. Their mutual love of Halloween is part of what bonded the pair, having thrown seasonal bashes in their hometowns.

“[Jason] and his coworkers were all bartenders and students at the local university. [They] would get together and celebrate Halloween. And in much of the same effect, I did the same in Riverside. I [went to] college and grad school there. And my circle of friends, we all love Halloween, and every year we would get together and throw a party and decorate the house. Each year was a different theme,” Fred said.

The two exchanged notes, and after enjoying their first spooky season together in 2005, decided it was time to throw their own party. They fashioned handmade invitations and presented them to friends they had made at the gym, with an emphasis on gathering fellow gay men.

“So many gay men have spent their lives pretending to be someone they’re not,” party attendee Adam Arsenault said. “Halloween gives us the chance to be whoever we want to be.” 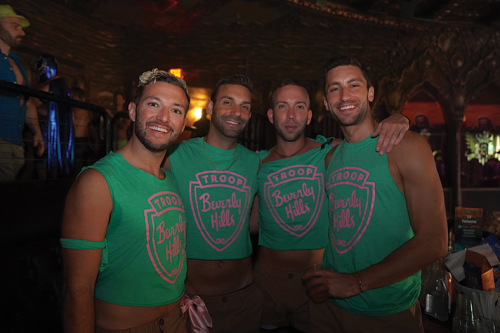 As the word got out, the anticipated attendance began to snowball. With a large headcount expected, they decided to charge $15 at the door and collected $3,000. Having recently helped launch the Young Professionals Council at the Los Angeles LGBT Center, the couple wrote a check for $3,000 to the YPC.

In the following years, the party, christened Halloweenie, became an official, partnered fundraiser for the center. By the third time around, the party was bringing in $20,000-30,000, but the size of the crowd was taxing the couple’s home.

The fourth year went to the Henry Fonda Theatre in Hollywood. Subsequent years would be hosted at places like the California Science Center and Hollywood Forever Cemetery. By this point, the party had become a global phenomenon.

Attendance has climbed to as high as 3,000, although with COVID precautions, the 2021 party maxed out at 1,500. This time around, Halloweenie ticket sales will be limited to a similar number.

After benefitting the center’s Young Professionals Council for several years, the party partnered with the Los Angeles Gay Men’s Chorus, with proceeds benefitting the organization’s youth outreach program. Beginning in 2021, Project Angel Food, an organization with roots in the LGBTQ+ community, sponsored Halloweenie.

“Project Angel Food was born through the need of helping primarily gay men through the HIV/AIDS crisis during the late 1980s, and we were founded in West Hollywood, with a lot of LGBTQ+ support,” said Brent Webster, senior manager of events at Project Angel Food. “Our mission has expanded over the years [addressing] multiple illnesses and clients of all ages, all races, all orientations, all of Los Angeles. So, being involved in an unapologetically gay fundraiser celebrates our roots, honors the hundreds of LGBTQIA+ clients we serve today and allows us to generate new awareness and involvement within the community.”

This year, Halloweenie will be held at the Belasco Theatre downtown with the theme “Peace, Love and Discoballs: a Hallowenie Lovefest.” Party co-sponsor Kevin Huvane came up with the upbeat idea.

“Kevin really wanted to have a very fun, active, happy, joyful, and colorful party this year. We’ve gone through so much crap [as a society],” Jason said.

“Our ballroom this year is going to be the love shack,” Fred added, likening the theme to the late-1960s-1970s hippie era. 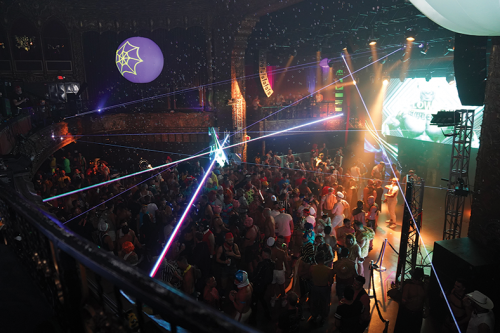 “There will be many amazing costumes playing off this glitzy and energetic love-filled theme,” Webster said. “Project Angel Food has always been about leading with love, [and with] Halloweenie [we’ll] amplify this even further. We’re leading with love and sparkling with glitter along the way.”

Fred said that it all comes down to bringing the city’s LGBTQ+ community together, citing the Anawalt family which owns Anawalt Lumber Company in West Hollywood, which has put together the party’s photo booth for many years.

“They’ve served that community themselves, and this year, the Anawalts have stepped up even more. They’re really helping us organize it,” Fred said. “They recognize the idea of what we’re trying to accomplish by community helping community.”

“To care for our invisible neighbors isn’t a gay thing or a straight thing, but when a bunch of gay guys are going to party with a purpose, it certainly gives our work a much-needed infusion of energy and donations as we deal with rising costs and expanding need in the community,” Webster said. “We’re raising the fun level and raising much needed funds in the process.”