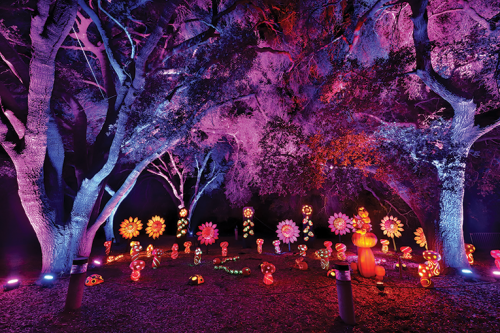 Nights of the Jack

Universal Studios Terror Tram expands on the backlot and incorporates the new “Nope” set, plus four frightening houses. “Universal Monsters: Legends Collide” expands on the thrilling legacy from Universal Pictures as the most notorious horror icons, The Wolf Man, Dracula and The Mummy, come together for the first time ever in an epic battle. The “Universal Horror Hotel” lives up to its reputation as the original owner continues to haunt the place and guests must escape his vengeful spirit or risk becoming a permanent resident. “The Wizarding World of Harry Potter” will be open during Halloween Horror Nights, inviting guests to experience some of their favorite attractions, for the first time ever, Death Eaters a group of Voldemort’s most devoted followers will roam Hogsmeade village, looking to find others willing to show loyalty to the Dark Lord’s cause. Other rides open include “Jurassic World-The Ride,” “Transformers: The Ride-3D,” “Revenge of The Mummy-The Ride” and “The Simpsons Ride.” To purchase tickets, visit halloweenhorrornights.com.

Running from Sept. 10-Oct. 31, Fright Fest is one of Los Angeles’ scariest Halloween events with 14 terrifying haunted houses and dare-to-enter scare zones. There are bone chilling, eerie shows and devilish treats. Plus, ride the park’s most popular monster coasters without lights. During the day bring little ones to Kid’s Boo Fest for a walk along the daytime Trick-or-Treat trail through Bugs Bunny World. Adults will enjoy the Fall festivities while sipping craft and seasonal beers and biting into a variety of German fare. Listen to themed music while participating in a variety of activities. sixflags.com/magicmountain/events/fright-fest-event. 100 Universal City Plaza.