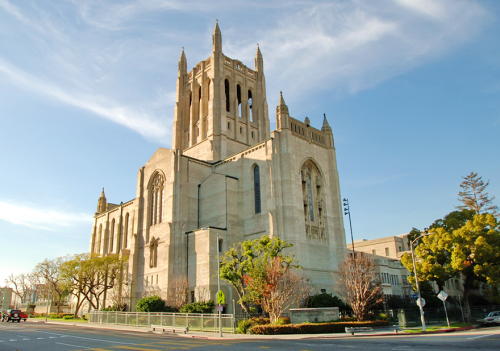 When the doors of the distinctive gothic revival style cathedral opened in 1932, members of the First Congregational Church of Los Angeles must have marveled at its grandeur.

The oldest continually operating Protestant church in Los Angeles, First Congregational was founded in 1867, and the cathedral on Commonwealth Avenue and Sixth Street is its fifth home. Located on land donated to the congregation by Carla Shatto, wife of one of Los Angeles’ early real estate developers, the church was modeled after the great cathedrals of England and France. The concrete reinforced building was designed by Los Angeles architects James E. and David C. Allison and features many intricate fixtures including a 157-foot tower reminiscent of Oxford University’s Magdalen College, and a spacious sanctuary capped by a 76-foot ceiling. Decorative bronze doors lead to the sanctuary, and hand-carved oak inlays grace the pulpit. Colorful stained-glass windows throughout the sanctuary allow ample natural light to shine through.

Senior minister and CEO Laura Vail Fregin called the building “magnificent,” and said the church’s beauty is timeless and stands as a testament to the dedication and skill of the architects and craftspeople who built the structure.

“It was a miracle undertaking, especially during the Depression. I am constantly thinking about that as I am walking through there. I’m amazed that over 1,000 men worked on that building, [and] it gave work to a lot of people in Los Angeles in a very difficult time,” Fregin said. “And when you’re in the sanctuary, it’s absolutely beautiful. You can really hear that organ. The pillars … reflect the sound and you are definitely surrounded by that music, which is just amazing in that sanctuary.” 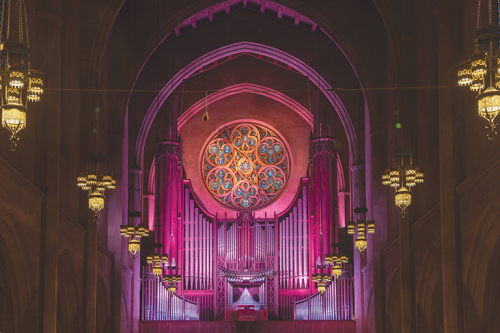 The stained-glass windows in the sanctuary at First Congregational Church colorfully illuminate the nearly 100-year-old landmark. (photo by Edwin Folven)

Fregin said the church building has remained in its original state over the years, save for a few small renovations.

“The sanctuary, the Shatto Chapel, our forecourt, the Mayflower courtyard, all the pieces that are part of that [past] are exactly as they were,” she said. “But the church itself has changed dramatically. It started out as a very intellectual church, very liberal in that era, and it changed during the 1940s, ‘50s and ‘60s. But now, it has come full circle to where we once again have a very progressive church that is intellectually-based. Science is so important to us. Scripture and beauty, culture and the arts all come together in this place.”

Fregin said the church grew its membership around the world by livestreaming services, allowing parishioners who cannot worship in person to see and enjoy the historic space. First Congregational welcomes new members and keeps its doors open to everyone, she added.

“We have worked hard to make the space sacred, not only in person, but online, and it is truly beautiful to see how that has been achieved,” Fregin said. “A lot of people don’t even know it’s here and once they find it, it’s miraculous because it’s just such a beautiful place.”