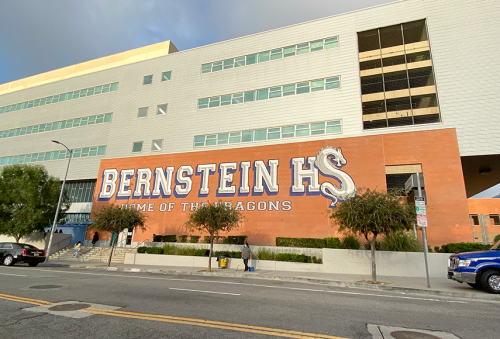 Updated at 2:50 p.m. on Sept. 15, 2022: The Los Angeles Police Department announced on Sept. 15 that two teens have been arrested in connection with the overdose death of a 15-year-old student at Helen Bernstein High School in Hollywood.

Authorities identified the student who died as Melanie Ramos, 15. At least two other students also ingested the pills, overdosed and survived. One of them is a friend of the deceased victim and the other is a student at Hollywood High School. Police believe the students purchased the pills at Lexington Park.

A 15-year-old girl died at Helen Bernstein High School in Hollywood on Sept. 13 and her female friend was hospitalized after overdosing on pills that may have been laced with fentanyl, police said.

The Los Angeles Police Department’s West Bureau Homicide Unit is investigating the overdoses, as well as two additional overdoses that allegedly occurred in a park near the Bernstein High School campus. Investigators believe the girl who died and her friend purchased the pills from someone at Lexington Park, located in the 5500 block of Lexington Avenue, approximately four blocks southeast of Bernstein High School.

“What we think, based on our investigation, is that at least these two girls went over to the park to purchase Percocet, and they were given a pill that may have been laced with fentanyl based on our experience, and it caused this deadly reaction,” said Lt. John Radtke, with the West Bureau Homicide Unit.

Authorities did not release the victim’s names. The two girls were students at the school. The overdoses occurred after school, police said.

Officers from the LAPD’s Hollywood Division responded to the high school around 9 p.m. after receiving a call from the stepfather of the girl who survived. He had been searching for his missing stepdaughter and located her at the school, which is at 1309 N. Wilton Place, near Sunset Boulevard. Police said the girl told her stepfather that her friend was in a bathroom and needed help. The parent found a school employee and they entered the bathroom and located the other girl, police said. They called 911 and police and fire department personnel arrived. Paramedics pronounced the 15-year-old dead at the scene, and transported the other girl to a hospital, where she was listed in stable condition, police said.

Authorities did not divulge how they determined the girls purchased Percocet pills at Lexington Park, but said they are investigating two non-fatal overdoses that occurred at the park on Sept. 12 and are likely related to the overdoses of the Bernstein High School students. Authorities did not provide any further information about those cases.

Percocet is a prescription medication that contains oxycodone, and it is used to treat pain. Fentanyl is a powerful and dangerous opioid that is sometimes mixed with other drugs, resulting in overdose and death, police said.

The Los Angeles Unified School District said the high school was open on Sept. 14 and grief counselors were available to students and employees.

“We are working with the LAPD, the lead agency on this ongoing investigation, and at this point, and due to confidentiality issues, we have no further information to share,” read a statement from the LAUSD. “As we work together with LAPD to uncover the details of this tragic situation, out thoughts and prayers go out to the family and friends of both students. We also thank everyone for their understanding and support and will share more information as it becomes available.”

Police are asking anyone with information call the LAPD’s West Bureau Homicide Unit at (213)382-9470.

Leads sought in hit-and-run on Sunset in Hollywood