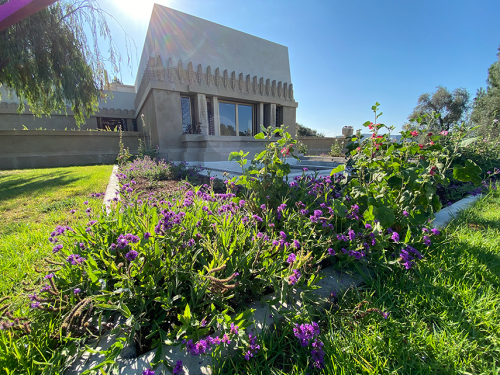 Visitors step inside the residence – the first Wright-commissioned home in Los Angeles – and become immersed in its intimate wood-paneled elegance. Hollyhock House reopened for self-guided tours in August after being closed for two years. Visitors walk through the approximately 6,000-square-foot house at a leisurely pace and take in the intricacies of each room. Docents answer questions and provide information about the house and its history.

Located in the 36-acre Barnsdall Art Park at 4800 Hollywood Blvd., Hollyhock House is the only property in Los Angeles on the UNESCO World Heritage Sites List. It received the designation in 2019 along with seven other structures throughout the United States considered to be unique examples of Wright’s architectural design. Hollyhock House is a National Historic Landmark and Los Angeles historic-cultural landmark, operated by the Los Angeles Department of Cultural Affairs.

Built from 1919-21, Hollyhock House was created for Pennsylvania oil heiress Aline Barnsdall. Designed to showcase the garden, the home features many windows, patios and terraces offering panoramic views of the city. The hollyhock, Barnsdall’s favorite flower, blooms on motifs throughout the interior and exterior, including on distinctive decorative finials around its perimeter. 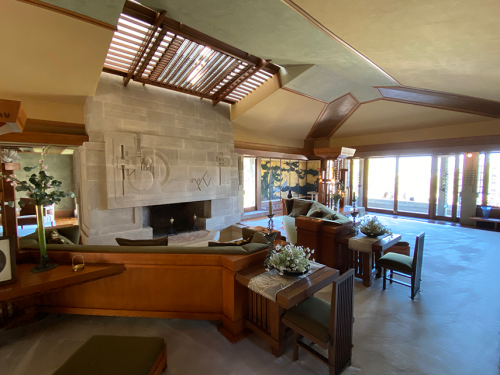 “We’re reopening with self-guided tours at this point, and those tours offer unprecedented access to the outdoor garden spaces, the recently restored south terrace garden, which is off the private wing of the house, and the serene patio. You can get a closer look at Hollyhock House’s iconic west façade,” Hollyhock House curator Abbey Chamberlain Brach said. “We’re excited with the new tour format that better highlights our garden spaces here at Wright’s self-described garden house.”

The Mayan Revival design for Hollyhock House heavily emphasizes nature. Wood paneling warms the rooms and much of the original wooden furniture has been meticulously recreated or restored. The centerpiece of the house is the monumental fireplace in the living room. Wright designed a bas-relief sculpture set among 17 cast concrete blocks above the fireplace, and surrounded it with a moat.

“It’s the most show-stopping feature of Hollyhock House,” Brach said, adding that upgrades were made during the recent closure and a small bridge that crosses over the moat was restored.

“The fireplace, typical in a Frank Lloyd Wright house, is the heart of the home,” said docent Margie Grady. “In this case, it was designed to represent the four basic elements: earth, air, fire and water. And it has a moat, which is part of a whole house water feature.” 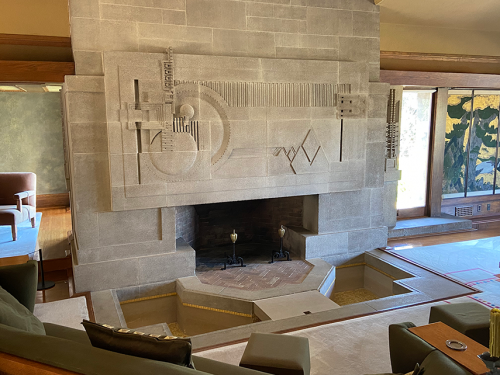 Frank Lloyd Wright designed a bas-relief sculpture set among 17 cast concrete blocks above the fireplace, and surrounded it with a moat. (photo by Edwin Folven)

The library, or study, is a warm and spacious area with hardwood floors and bookcases, and a large picture window allowing ample light. The large kitchen has been renovated with new lighting and cabinetry with wood surfaces matching the other rooms in the residence.

Extensive restorations were made to Hollyhock House from 2012-15, and renovation work is currently underway on a guest house nearby known as Residence A. Plans call for the guest house to also reopen to the public in 2024.

Brach said Hollyhock House is an important educational resource and opening it to the public fulfills the wishes of Barnsdall, an ardent supporter of the arts. Barnsdall donated Hollyhock House and the surrounding property to the city in 1927 for use as an art park. It also includes a gallery and theater.

Brach stressed the significance of Hollyhock House’s UNESCO World Heritage Site designation, which places it among 1,154 places worldwide recognized for their cultural and historic importance. Being added to the list is a long process requiring extensive research and documentation.

“It was it at least a 15-year process that was undertaken by our former curator Jeffrey Herr. To become a UNESCO World Heritage Site, you first have to be on the National Register, and from there, a list is developed of sites that the Department of the Interior puts forward to the international bodies that determine what sites get added to the UNESCO World Heritage List,” Brach added. “Hollyhock House is one of eight Frank Lloyd Wright designed sites [throughout the U.S.] that represent the architect’s entire body of work. It is the first modern architecture designation for the United States. This is such an exciting thing for the country. We are the first cultural site in California and the first UNESCO site in Los Angeles.”

Advance tickets are required for self-guided tours, and Brach said demand has been high, with tickets frequently selling out. Tours are offered from 11 a.m.-4 p.m., Thursday through Saturday, and tickets are $7.

“Plan early,” Brach added. “We want people to come and enjoy Hollyhock House, which is an architectural treasure in Los Angeles. We are happy it has finally reopened to visitors.”