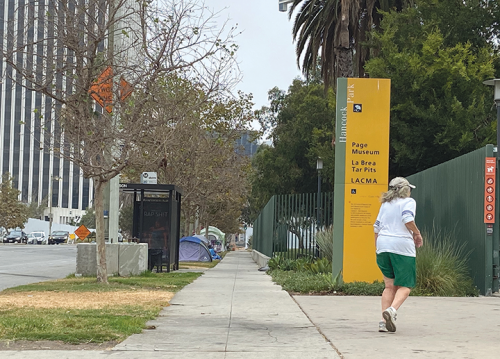 Tents along Wilshire Boulevard were removed on Sept. 19, and the area remained clear on Sept. 21. (photo by Edwin Folven)

Los Angeles city workers removed tents and belongings from a space along Wilshire Boulevard in front of the La Brea Tar Pits on Sept. 19 after what officials said was more than a month of outreach to people living in an encampment at the site.

The cleaning operation was conducted at the request of the office of Los Angeles Councilman Paul Koretz, 5th District, and was among numerous similar encampment clearings occurring throughout the city. Koretz’s spokeswoman Ali Simard said the focus is on linking as many people as possible in encampments with services and resources before the tents are removed. Notices are placed around the area at least 24-72 hours in advance before city workers arrive to remove the tents, and unhoused residents are allowed to take belongings with them. The city does not publicly announce when and where the encampment cleanings will occur other than posting notices onsite. The city holds numerous clean-up operations daily in all 15 council districts, said Elana Stern, spokeswoman for the Los Angeles Department of Public Works.

“It’s really hard to quantify the number of cleanings,” she added. “We have been engaged in these cleanings for several years, providing critical sanitation services.  There are crews in the field every weekday, covering multiple locations across the city.”

The encampment in front of the La Brea Tar Pits had existed for more than two months. Simard said the councilman’s office received numerous complaints about it from people who use the park around the tar pits and live in the surrounding neighborhood. The city worked with People Assisting the Homeless, or PATH, to conduct outreach at the site for at least a month leading up to the cleaning. There were approximately 10 people living in tents at the site and outreach workers engaged with six people there, PATH spokesman Tyler Renner said.

“The others didn’t want to engage with our team,” he added.

“LAHSA outreach was on site for operations at La Brea Tar Pits and outreach has occurred previously from PATH, who is the assigned outreach provider in that region,” Fellows said. “They have done extensive outreach in the area.”

Posts on social media showed police officers and workers clearing the area in front of the La Brea Tar Pits, including a woman who was briefly detained before being released, and criticized the way the city clears encampments. Requests for comment to Services Not Sweeps, an L.A.-based coalition of more than 35 community organizations demanding a care-centric approach to homelessness and the end of criminalization, according to its website, were not returned.

The city uses different approaches to identifying which encampments are to be cleared. One approach, using a program known as CARE+, is driven by the City Council offices and is based on complaints and observations by city staff. The CARE+ clearings do not require City Council approval.

The city also clears encampments when they are found to be in violation of Los Angeles Municipal Code 41.18, which was approved by the City Council in early August and prohibits people from blocking sidewalks in front of schools, daycare centers and other sensitive locations. For those encampments, councilmembers author a motion for each specific site and they are voted on by the City Council.

Representatives for the Natural History Museums of Los Angeles County did not answer questions about the encampment in front of the tar pits. It remains unclear whether the museum complained about the tents or played any role in the encampment’s removal.

“We are aware of the ordinance passed and defer to the city of Los Angeles,” read a statement provided by NHM.

Simard said encampment cleanings will continue throughout the 5th District, but did not have a list of the sites. All operations will include at least one month of outreach efforts by PATH before the encampments are cleared.

“PATH contracts with Council District 5 to provide concentrated, trauma-informed outreach,” Renner added. “PATH partners with LAHSA and other providers to connect people to services, shelter and housing. When needed, the teams work with mental health and substance use specialists. We meet with the council office every other week to deploy our teams to areas ahead of legally-posted cleanups. Part of these efforts included the area around the La Brea Tar Pits.”

“The city has recently updated its protocols regarding homeless encampments and the public rights-of-way, and all our policies involve significant outreach to people experiencing homelessness,” O’Farrell said. “In my district, we go above and beyond what is mandated by the ordinance, as we contract with an unarmed service provider (Urban Alchemy) to provide supplemental outreach and services across the district. This dedicated outreach, combined with the comprehensive housing options we continue to stand up, allows us to keep public rights-of-way safe, clean and accessible for all.”

Some in the Miracle Mile area said they understand that the city is trying to help people who are unhoused but wish more assistance could be provided.

“I have a concern as to whether or not they are doing enough … everything possible they could responsibly be expected to do,” added Greater Miracle Mile Chamber of Commerce President Stephen Kramer. “There is more that needs to be done, that is certain. But this isn’t just a city problem, it’s a county problem. The county has the resources and they should be tapped.”

Honoring the queen at Tam O’Shanter