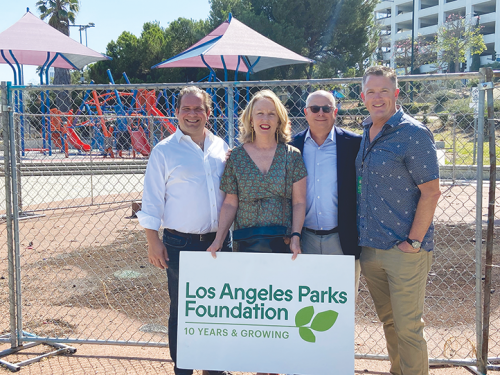 On Sept. 13, city park officials and representatives of Hackman Capital Partners, the owner of Television City, announced that the play structure will be replaced. Hackman is donating $236,000 for the new playground equipment, which will be installed by the city. The project must go through the city entitlement and procurement process. The goal is for the equipment to return to the park next year, said Eric Calhoun, senior recreation director of Pan Pacific Park.

“It was always among the most popular facilities in the park, so we are very grateful for the donation and are happy that the playground will return,” Calhoun said. “It’s really helping us bring the playground back to the community.”

Carolyn Ramsay, executive director of the Los Angeles Parks Foundation, helped facilitate the donation from Hackman Capital Partners, which has been partnering with the city and the community to improve the neighborhoods around Television City. The Los Angeles Parks Foundation raises money to support the city’s parks, and Ramsay said Hackman Capital Partners was immediately willing to help with the Pan Pacific Park playground.

“I had already been in touch with Hackman and Television City about potential support for Pan Pacific Park, and I’ve been pitching them different ideas because I knew about [developer] Michael Hackman’s philanthropy and generosity,” Ramsay said. “This one came together in such a beautiful way because Michael Hackman is a very unusual corporate leader who is also very philanthropic, and he just dove right in to support this playground replacement.”

“Our first intention was to do this quietly … but the goal here is to get more people to do more,” Hackman said. “We have been talking about how important it is for us to build connections with the park, physically, and to encourage the community to access and utilize the park. So much of what we’re doing at the studio is looking to enhance the connection that we have to the park here and to encourage folks to utilize it, folks who are looking to take a lunch break or take a walk and stretch their legs, but also to create a more connected community where the park feels much more accessible to the families and community members who rely on it.”

Hackman Capital Partners has proposed a major expansion at Television City that will increase the number of sound stages and production support space at the site. Some opposition has surfaced in the community to the project because of its size and scope.

Hackman Capital Partners is working with the community on many improvements. Brian Dror, a longtime Beverly-Fairfax District resident and leader in the Orthodox Jewish Community, said he is thankful for the support from Hackman Capital Partners, adding that the return of the play structure will be welcomed by residents.

“A lot of the Orthodox Jewish community lives in apartments or smaller properties where they don’t have a backyard, so the ability to come out to the park and to partake and have the public facilities so the kids can play and run and grow and develop is incredibly important,” Dror said. “Especially with the younger the kids, the more important the development is, and the more important the exposure is to the outdoors. We live in Los Angeles, which has great weather and great opportunity for outdoor exposure. We might as well take as much advantage of it as possible.”