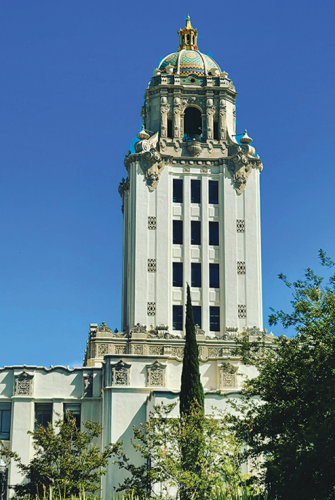 The city of Beverly Hills boasts one of the most iconic city halls in the world, with a distinctive H-shaped building and nine-story tower topped by a blue, green and gold tiled dome.

Designed by Beverly Hills architects Harry G. Koerner and William J. Gage in the Spanish Revival-style, the City Hall building opened in 1932 and has been a landmark ever since. To celebrate its opening, a banquet was held inside with guests of honor including Will Rogers, the “first unofficial Mayor of Beverly Hills,” and stage and screen actor William Collier, Sr. At the time, City Hall was surrounded by open space and railroad tracks, and the city rapidly filled in around the stately building.

A multitude of intricate design elements on its interior and exterior make it one of the most aesthetically unique structures in the region. A report on its architectural significance was compiled when City Hall was designated as a local historic landmark in 2013. It highlighted that Koerner and Gale incorporated extensive ornamental terra cotta on the exterior of the concrete reinforced building, enhancing its appearance. Wrought iron grilles adorn metal-framed windows, terrazzo floors lay a pathway through the building followed by marble baseboards, travertine walls and ornately coffered ceilings. Outside, the landscaped courtyards and gardens lend a pleasing aesthetic with their green foliage.

The City Hall campus is located on an irregularly-shaped parcel between North Rexford Drive, Burton Way, North Crescent Drive and Santa Monica Boulevard. The original entrance to the lobby was off Crescent Drive. Extensive renovations have been made over the years, with major upgrades in the 1980s in keeping with the structure’s historic and architectural character. In 1990, the city of Beverly Hills opened its Civic Center at 455 N. Rexford Drive, with City Hall as the centerpiece, and the Beverly Hills Library and the city’s police and fire department headquarters adjacent. The tower at Beverly Hills City Hall is currently closed while it undergoes seismic retrofitting. 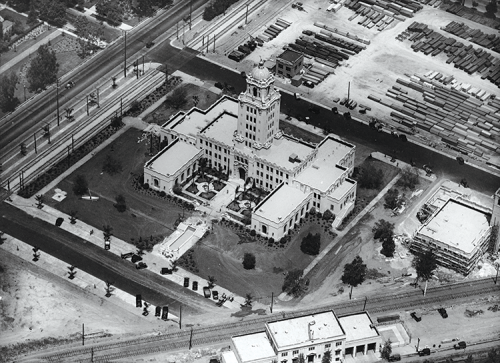 Beverly Hills City Hall was completed in 1932 and has served as the heart of civic affairs ever since. (photo courtesy of the Beverly Hills Historical Society)

With the retrofit project underway and plans for a future reopening of the tower, Beverly Hills City Hall continues to provide an important connection to the city’s past and a symbol of hope for a promising future.