‘Do Revenge’ brings the Hitchcock energy to high school 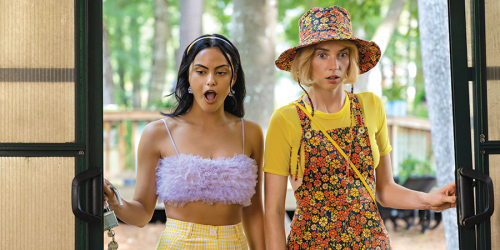 Drea (Camila Mendes) and Eleanor (Maya Hawke) have a lot of surprises in store during their senior year of high school in “Do Revenge.” (photo courtesy of Netflix)

Who thought Hitchcock’s “Strangers on a Train” needed the “Clueless” treatment? Director Jennifer Kaytin Robinson – and she sticks the landing with “Do Revenge,” a teen satire flush with charm, quality performances and ridiculous costumes.

Drea (“Riverdale’s” Camila Mendes) runs her posh high school. That is until a private video meant for BF Max’s (Austin Abrams) eyes only spreads across campus. Too bad these rich kids fancy tone policing more than right action, so Drea, not her soon-to-be ex, gets punished.

But that was last school year. As summer comes to an end, new student Eleanor (Maya Hawke) begrudgingly prepares to spend senior year in an entirely new school, also attended by the girl who once outed her and fabricated a story that deemed her a pariah.

“Doing revenge” is on Drea and Eleanor’s minds, but what can they do without committing social suicide? Drea hatches a plan. They’ll each infiltrate the other’s social circles and ruin a slut-shaming faux-woke popular guy and a vane gossip.

Nobody will see it coming as they keep their plan, conversations and emerging friendship secret. The stakes never elevate to murder, but for a teen flick, they’re pretty high: college acceptance, classism, the depths of trauma.

“Do Revenge” feels like a straight-laced high school revenge story à la “Mean Girls.” To a degree, this is heist film complete with fleshed out plans and low-grade spy games.

It’s all quite fun. Mendes and Hawke clash wonderfully on screen with equal parts confidence and insecurity. Both co-leads are fine-tuning their best typecasts from other grade-school series. Mendes’ performance is quite similar to her other teen role, Veronica from The CW’s “Riverdale.” And Hawke is almost a carbon copy of her “Stranger Things” character. 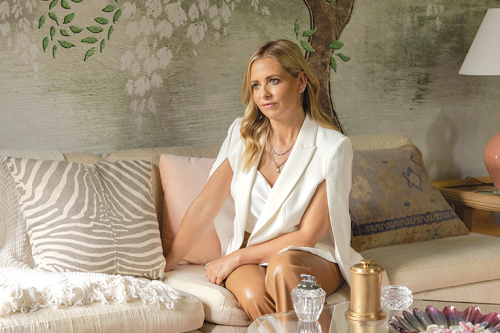 Sarah Michelle Gellar has one of the best supporting roles as the headmaster in “Do Revenge.” (photo courtesy of Netflix)

Don’t fault them. “Do Revenge” doesn’t call for any more than they provide. And what they provide works incredibly well – strong chemistry that dominates most of the film.

The bit players also perform admirably, including “Game of Thrones’” Sophie Turner as a snob who goes off the rails. But the best supporting part belongs to Sarah Michelle Gellar as the headmaster. In three brief scenes, she channels all the best parts of “Buffy” and “Cruel Intentions,” just a couple pop culture classics “Do Revenge” owes for its existence.

And then there’s the outfits. So many outlandish getups that jettison any notes of realism. Well, to a degree. This is real life on overdrive, high schoolers hopped up on mommy and daddy’s endless checking accounts.

Drea is the exception. The daughter of a single working mother – like all the rest who go unseen – she makes her own clothes and fights for the status merely given to her richer peers. She has a plan, Yale then Harvard Law, perhaps a revenge scheme and friendship with a fellow outcast can coax some more.

Eventually, the heist motif encounters some obstructions. Like a rom-com, it can’t all be smooth sailing. But things don’t go the way you might think. For any sleeper fans of “Down With Love,” a quirky Ewan McGregor and Renée Zellweger comedy from 2003, “Do Revenge” is a spiritual sequel (I won’t say more than that, and don’t spoil it for yourself).

When “Clueless” adapted Jane Austen’s “Sense and Sensibility,” a new teen subgenre was born. It’s a modest body of work that “Do Revenge” complements. It goes down easy without succumbing to cheesy elements or anything too cringy. The third act might be a bit too tidy considering how batty things get, but it’s enjoyable from start to finish.

A pleasant afternoon at Velverie Café