‘Coffee With a Cop’ addresses brewing concerns about crime 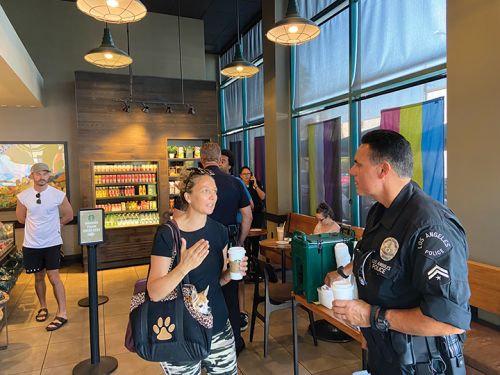 Community members met with police officers during an informal event on Sept. 13 at Starbucks near Beverly Boulevard and La Brea Avenue. (photo by Edwin Folven)

Officers from the Los Angeles Police Department’s Wilshire Division and West Traffic Division came together with community members on Sept. 13 during “Coffee With a Cop” at the Starbucks at 7122 Beverly Blvd.

“This is an opportunity for the officers to interact with the community. They get to know each other and talk, and it’s always good when you have that community interaction,” Chow added. “You can come in and get a cup of coffee on your way to work and meet the officers, the senior lead officers and personnel who serve every day in your community.”

Chow added that the events also allow the police department to disseminate tips about public safety and crime prevention and inform about crime trends. He used the Melrose community as an example, stating that crime reduction efforts in the area including horse, bike and vehicle patrols have had a positive impact on safety in the shopping district. 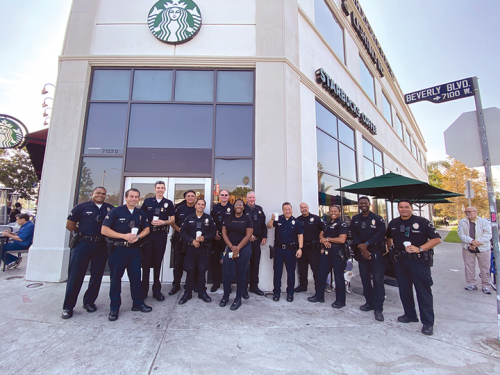 Officers from the LAPD’s Wilshire and West Traffic divisions participated in “Coffee With a Cop” at the Starbucks at 7122 Beverly Blvd. The program is held regularly at different coffee houses throughout the community. (photo by Edwin Folven)

Chow also referenced what he called a “different feel” on Melrose Avenue due to the increased police presence during the summer. He said the additional officers have helped reduce the perception the area is unsafe and added that the extra deployments will continue during the fall.

Senior Lead Officer Dave Cordova also participated in “Coffee With a Cop” and stressed steps to prevent becoming a crime victim. They include not keeping any valuables visible in parked cars, locking doors and windows, and reporting any suspicious activity immediately to police.

“A lot of it is the basics, not only locking your vehicles but also your residences, especially with the heat,” Cordova said. “Do everything you can to harden the target and prevent yourself from becoming a victim.”

For information about “Coffee With a Cop” or other opportunities to interact with the police department, call (213)473-0200, or visit lapdonline.org/lapd-contact/west-bureau/wilshire-community-police-station.