Clarkson has her star ‘moment’ where it all began 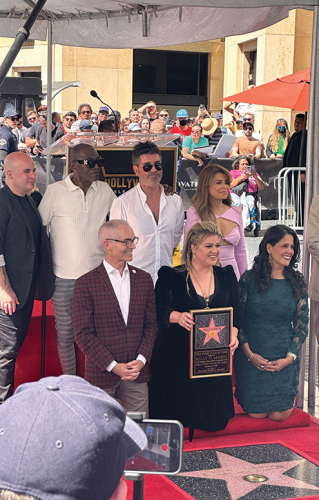 A moment like this was 20 years in the making. Kelly Clarkson received her star on the Hollywood Walk of Fame on Sept. 19 in a ceremony that brought back together Clarkson, the first winner of the long-running competition series “American Idol,” with the original series’ judges, Paula Abdul, Simon Cowell and Randy Jackson. Clarkson’s longtime music director Jason Halbert also spoke at the event.

“I’ll never know where my career might’ve gone had I not met Kelly, perhaps I would’ve succeeded with some other artist, perhaps I would have burned out hopping from gig to gig as many of my peers do,” Halbert said. “But what I do know is I would not be the person I am today had I not.”

The star is located at 6801 Hollywood Blvd. in front of the Dolby Theatre, the site where Clarkson was crowned “American Idol” on Sept. 4, 2002.

Cowell recounted how he, Jackson and Abdul were disheartened after the first day of auditions for the series.

“I actually thought I was being punked,” Cowell said. “On the first day, Paula resigned. Every singer was out of tune, and I thought this was a joke.”

Cowell went on to talk about how seeing Clarkson’s audition changed his mind.

“I remember the day we met you, and I remember not just your voice but your personality.

And I gotta be honest with you, I didn’t realize at that point, honestly, how good you were. I just liked you … and then there was the moment you sang ‘Respect’ … and we all looked at each other, and it was like, ‘Oh my God,’” Cowell said.

Clarkson sailed through the series as an audience favorite. She is one of the most successful alumni of the series, garnering three Grammy Awards and numerous other music industry honors. She’s clocked three No. 1 singles on the Billboard Hot 100, including “A Moment Like This,” “My Life Would Suck Without You” and “Stronger (What Doesn’t Kill You).” A Texas native, she also has had success on the Billboard country charts, including a duet version of “Because of You” with her own idol, Reba McEntire, that reached No. 2.

Clarkson now has a successful daytime talk show, “The Kelly Clarkson Show,” which tapes at Universal Studios. In its fourth season, Clarkson recently won a Daytime Emmy for her work as host of the series.

Each speaker at the event commented on Clarkson’s genuine personality.

“Her voice was a gift she was born with, and I believe it’s unmatched by anyone alive. But it’s her authenticity and her heart that has captured the soul of America,” Halbert said.

Abdul, who was not scheduled to speak, made a surprise appearance on the Walk of Fame stage to honor Clarkson.

“I love you,” Abdul said. “Thank you for changing the trajectory of my life and making me believe like a kid believes in Santa Claus that young, talented people can make it, and they can make it big.”

Clarkson interacted with the large swath of fans gathered on Hollywood Boulevard throughout the ceremony. When a fan yelled their support for her “My December” album, she pointed at them and said, “Thank you!” Clarkson’s children, River and Remy, respectively 8 and 6 years old, were in attendance, and she thanked them and her family, both biological and professional, for her success.

“I don’t think many people realize how many people actually make all of this happen,” Clarkson said, adding that her young children wanted her to wrap it up. “Please children, just smile one time for mommy by the star,” she quipped.