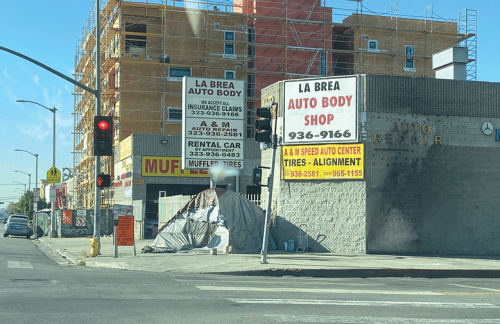 Tents remain at Willoughby and La Brea avenues near a new project under construction that will house homeless individuals. (photo by Edwin Folven)

Concerns have resurfaced in the Melrose community about unhoused individuals staying in tents on Willoughby Avenue, just west of La Brea Avenue, as construction on a 49-unit supportive housing building is ongoing just feet away.

On Sept. 25, police responded to reports of a disturbance at the site between a man and woman staying there, said Capt. Sonia Monico, with the Los Angeles Police Department’s Wilshire Division. One of the individuals threw clothing and debris in the street, requiring the city to close Willoughby Avenue briefly to clean up the area. Monico said the two people left by the time officers arrived, and they were unable to locate them. In such cases, police file a report and continue to monitor the area for further disturbances, but none were reported, Monico added. Peter Nichols, co-founder of the Melrose Action community advocacy organization, said the tents near Willoughby and La Brea avenues have long been a source of frustration for the community.

“It’s been an encampment for at least five years, off and on, “Nichols said. “They come and clean it and they disperse, and as soon as they leave, they come back.”

Three tents remained on Sept. 27 along the south side of Willoughby Avenue west of La Brea Avenue. Alison Simard, a spokeswoman for Councilman Paul Koretz, 5th District, said the city has conducted numerous cleanings at the site. Prior to each operation, signs are posted notifying people living there, and outreach workers meet with unhoused individuals in an effort to link them with resources and housing, Simard said.

“This is all part of our regular approach to outreach that is done before sites are cleaned,” she added. “I believe we’ve had outreach workers going out there regularly.”

The city partners with the Los Angeles County Housing Authority and organizations such as People Assisting the Homeless, or PATH, to conduct outreach. Simard said the last cleaning was held at the site on Willoughby Avenue on Sept. 2, and another is scheduled for the end of October. A specific date has not been scheduled, but notices will be placed in the area at least 24-72 hours before the cleaning occurs, she said. The city does not publicly announce when and where the encampment cleanings will occur other than posting notices onsite.

Cleanings are conducted by workers from L.A. Sanitation, and outreach workers and police officers are present. People staying at the sites are allowed to take their belongings but must leave the area. Those willing to accept services are linked with resources.

Monico added that the LAPD also takes a comprehensive approach to addressing individuals at encampments. If someone is experiencing a mental health crises, personnel from the department’s Mental Evaluation Team are dispatched to determine whether they need psychiatric treatment. In some cases, outreach workers from LAHSA and other organizations are sent to assist the individuals. Each instance is addressed on a caseby-case basis, but the focus is on getting people help.

The site of the encampment on Willoughby Avenue is a short distance from a new five-story project at 843 N. La Brea Ave. that will include 49 units of supportive housing for homeless individuals. Known as The Pointe on La Brea project, the building is currently under construction at the former site of an auto repair shop. The project is being financed through approximately $16 million in city housing bonds and approximately $10 million from Proposition HHH, a bond measure approved by voters in 2016 for the construction of supportive housing. The Pointe on La Brea is being built by EAH Housing, which broke ground in early 2022 and plans to open the building in early 2024. Simard said Koretz helped identify the site and has supported the project through the city process.

Nichols said he remains hopeful that the city will address the homeless issue in the Melrose area, and added that it is the source of many problems.

“It’s been a nightmare,” he added. Other groups also remain critical of the city’s efforts to clear encampments, including Fairfax Mutual Aid, which is comprised of community activists in the Beverly Grove and Fairfax District.

“Five unhoused people die a day in Los Angeles,” said Fairfax Mutual Aid member Meggie Kelley, in a statement. “The city is neglecting the housing crisis and instead of addressing the cause, they focus on the symptoms to perpetuate a fear mongering narrative of those experiencing chronic homelessness. The city needs to focus on permanent supportive housing with wraparound services instead of ineffective interim ‘solutions’ that continue to fail people with false promises of a path toward permanent housing. Constituents living on the streets deserve the exact same resources, care and support as housed people. Encampment sweeps are ineffective. They are nothing more than a game of whack a mole and repeatedly displace unhoused residents, isolating them and severing [them] from community support and resources.”