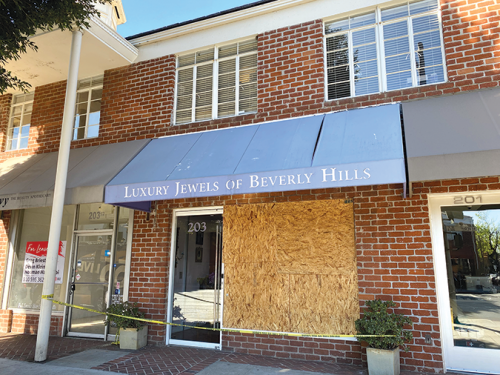 The suspects smashed a front window and burglarized the store at 203 S. Beverly Drive on March 22. (photo by Rance Collins)

The Beverly Hills Police Department announced the arrests of three male suspects on Sept. 21 in connection with a smash-and-grab burglary in March at a jewelry store on South Beverly Drive.

Police identified two of the suspects as Deshon Bell, 20, of Long Beach, and Jimmy Lee Vernon, 32, of Gardena. The third suspect is a juvenile who resides in Long Beach, and police did not release his name because he is a minor.

BHPD investigators and FBI agents served search warrants at three undisclosed locations in Long Beach on Sept. 21 and arrested Bell and the unnamed juvenile suspect. Officers recovered a handgun and high-capacity ammunition magazine at the location where Bell was arrested, police said.

Vernon was taken into custody on Sept. 21 in Barstow after a California Highway Patrol officer pulled him over. A judge previously issued arrest warrants for the three suspects, who are facing burglary and conspiracy charges. Police said evidence connecting the suspects to the crime on South Beverly Drive was recovered when the search warrants were served, but declined to provide specifics.

A fourth suspect, Ladell Tharpe, 37, of Los Angeles, was already in custody for an unrelated offense. He is facing federal robbery charges in connection with the crime on South Beverly Drive.

The investigation is ongoing and police are still searching for the additional suspects. Anyone with information is urged to call the BHPD at (310)285-2125. Anonymous reports can be made by text to TIP BHPDAlert followed by the tip information to 888777, and by calling Crime Stoppers at (800)222-8477 or visiting lacrimestoppers.org.