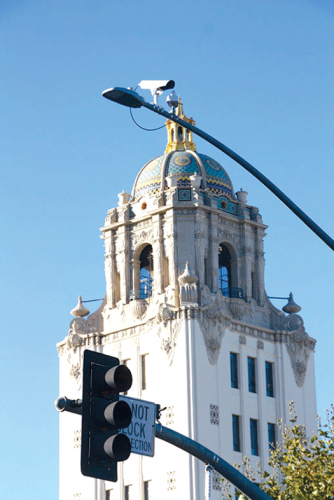 Of the 19 parking garages in Beverly Hills, there are only five without closed circuit TV cameras.

At the request of Mayor Lili Bosse, city officials have devised an expedited plan to equip the remaining garages with CCTV, speeding up the process by approximately two years.

Beverly Hills Police Department Chief Mark Stainbrook and public works director Shana Epstein presented the plan on Sept. 20 to install the remaining cameras by December 2023 instead of by 2025, as previously anticipated.

Staff has already begun the first phase of identifying as many as 33 locations where cameras will be installed while the final design is developed. Epstein said that this first batch of cameras could be installed as early as December.

For the second phase of the plan, staff will prepare the design and bid documents for all remaining structures as a multi-site project, Epstein said. With this faster approach, Epstein expects the final design to take three months, the bidding to take four and construction to last five or six months.  She hopes all cameras will be installed in the remaining parking structures by December 2023.

The project’s price tag, which exceeds $2.85 million, raised questions from some council members.

Councilwoman Sharona Nazarian said that while she is “all for safety and security,” she urged her colleagues to be mindful of directing funds away from other projects that could have a bigger impact.

Stainbrook said over the past two years, there were no recorded crimes at three parking structures, and there were three or less crimes recorded at 12 of the city’s garages.

“Having nice, shiny new things is fantastic, but if we don’t take the time and effort to do maintenance on these items … that concerns me,” Nazarian added.

Councilman Lester Friedman asked if allocating funds to the project could cause staff to ignore other necessary improvements to the parking garages.

Epstein said that the city will be delaying some painting and slab work in the structures, though she added “high priority” garages have already received improvements, and others could be deferred for about a year.

Friedman said he still supports the project, as long as public works keeps the council informed about its progress.

“I think it is appropriate to have camera coverage in all of our parking structures. I appreciate the expedited process,” he said.

Councilman John Mirisch said that the City Council approved the staff’s plan, and it is now up to city staff to carry it out.