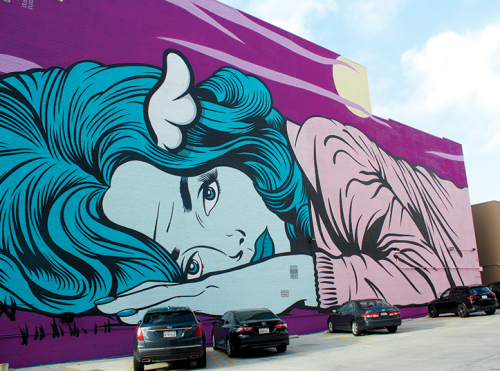 A purple mural of a neon-haired woman spans a building facing Beverly Drive in Beverly Hills,( photo by Joey Waldinger)

Against a purple backdrop, the mural depicts a woman with billowing turquoise hair lying on her side and staring at pedestrians walking by.

The mural, larger than any other in the city, however, was approved under a temporary permit that has since expired and through a process potentially violating city code, sparking debate among council members about how murals should be approved in the city.

Councilman John Mirisch said that he had raised the issue at a Sept. 12 study session with the hope of adding it to the agenda of a formal council meeting.

None of his colleagues agreed to do so, leaving the door open for future murals to be approved the same way, he said.

“I did want a formal discussion of the procedures. I think in the future, any time something like that comes up it should go to them,” Mirisch said, referring to liaisons for the architectural commission.

He said this would ensure “that we’re not blindsided like we were this time.”

Although he requested during the study session that this matter “be called up for discussion,” other council members and Mayor Lili Bosse said that step was unnecessary, given the project’s wide approval by the architectural commission.

Still, the councilmembers questioned whether the process for approving such projects should be reviewed.

Explaining the mural’s origins, assistant city manager Ryan Gohlich said it was approved via a special events permit on July 27 for a temporary installation, which expired on Aug. 25.

He added that after the permit was approved, project manager Warren Brand requested to maintain the mural past the special event time period, which the commission unanimously approved on Aug. 17 with a condition that the applicant be responsible for maintaining the artwork.

Now, as it is within the 30 day period from the original decision, the council has authority to revisit the issue, Gohlich said.

Mirisch questioned whether the project met the criteria to be approved under the temporary accommodation.

Noting during the study session that the architectural commission may approve murals and “environmental graphics” under the temporary accommodation only if they have architectural or landscape features, Mirisch said that this mural has neither.

Councilman Lester Friedman said that since this was being raised during a study session instead of a formal meeting, “there should be no discussion of the merits of whether or not the architectural commission was right or wrong, or whether or not it should be or shouldn’t be approved.”

“The only question on the table is, is this appropriate for a city council discussion about whether or not the mural should be a bit improved,” Friedman said.

Given the architectural commission’s unanimous vote on the project, Friedman said he didn’t believe there was a need to call up the project.

Councilwoman Sharona Nazarian said that while she had no qualms about the art itself, the council needs to look at the approval process for such projects.

“If we ask our commissioners to lead, we need to respect that. If the process is not working, or if we don’t appreciate it, then we need to review the process,” she said.

This is not the first time that a mural has been approved temporarily, only to become a permanent fixture, Bosse said.

Like with D*Face’s mural, a mural behind Alfred Coffee was created as a temporary installation before receiving permanent approval from the architectural commission, Bosse said.

While it is has typically been city practice for mural approvals to bypass a liaison and go straight to the commission, D*Face’s mural stands alone because of its size, Gohlich said.

“It is much larger than any murals that have been approved previously,” Gohlich added.

“I’ve already … given direction to our special events staff that something of this scale should not be approved in the future without first going to the liaison.”