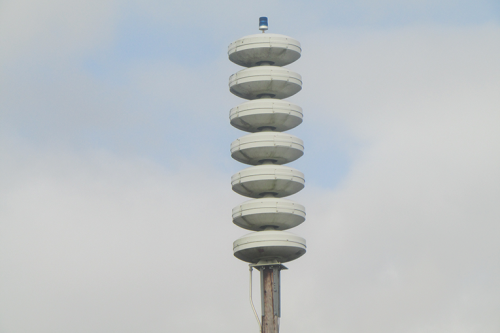 The city of Beverly Hills is installing 12 sirens to warn residents about potential disasters. (photo courtesy of Wikimedia Commons)

Construction company Syblon Reid on Sept. 20 was awarded a $1.37 million contract to install 12 sirens across the city that will blare in the event of a fire, earthquake, terrorist attack or other man-made and natural disaster.

Director of public works Shana Epstein added that the idea to install the sirens did not stem from any particular incident, but was instead part of a concerted effort by the city to communicate with residents in times of peril.

“The City Council just wants to ensure we have every means to really notify the community [in the case of a disaster],” Epstein said.

“We can text, we can call, we have a radio channel … They just really wanted to make sure that they explored all avenues to really communicate with the public when there’s an emergency and where to go,” she said.

City staff will hold a pre-construction meeting next month to discuss logistics including the project timeline and traffic mitigation, but construction of the siren system will not begin until all of the necessary materials are procured, Elayyan said. It is not yet known how long that will take, he added.

Epstein said that because of supply chain issues, it is hard to predict exactly how long construction will last.

The sirens, which will be controlled by the city’s Emergency Response Services and Police Department, will have different tones for different disasters, Elayyan said.

The sirens will mostly be used to instruct residents to shelter in place or evacuate, though officials can use them to relay further instructions if necessary, Elayyan said.

Demonstrations were held in December 2021 for residents to hear the sirens and ensure they wanted them in the city, and more detailed trainings about how to respond if they go off will be held after they are installed, Epstein said.

According to a Sept. 20 staff report, an ongoing public information campaign will be initiated to ensure that the message of the siren tones is understood and people know what action to take when they hear a siren. Staff will also work with surrounding cities and jurisdictions to ensure coordination when the sirens are activated, the staff report stated.

While some people who live close to the sirens may hear them if inside, they are mainly intended to warn people who are outside of their homes, Elayyan said.

A first round of bids was scrapped during a July 12 meeting, when the City Council determined that all five bidders had made one or more errors in their bids, according to the staff report.

After five new bids were submitted on Aug. 30, Syblon Reid was determined to be “the lowest responsive and responsible bidder,” according to the staff report.