‘Belle’ digitizes a tale as old as time 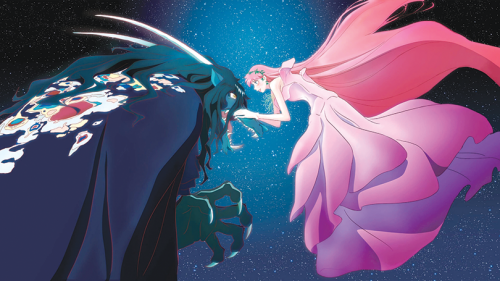 Bell and the Beast come together in the new animated feature. (photo courtesy of Studio Chizu)

The future is here, plenty of Japanese animated stories declare, but “Belle” finds solace in the past with a brilliant virtual take on the French classic “Beauty and the Beast.”

Like many upgrades, this one’s cleaner, more polished and loosed from that pesky Stockholm syndrome trope.

Plenty of social media platforms enjoy their 15 minutes, from MySpace to TikTok, but U marks a drastic shift. With a minimally invasive interface, users enter a virtual universe, futuristic and fantastical. Suzu Naito (Kaho Nakamura in Japanese; Kylie McNeill in English), a 17-year-old from the Shikoku prefecture, might be a reserved high schooler in reality, but U’s VR allows her to see past her psychological limitations.

Well, “see past” isn’t the most operable phrase here, rather “sing through.” A tragic event claimed both Suzu’s mother and Suzu’s own singing voice. But in U, hidden behind a digital artifice both appealing and shrouded in mystique amongst the pixelated masses, Suzu can belt power ballad after power ballad.

Known in U as Bell, she’s an immediate hit, the talk of U and her classmates, who know not her anonymous identity. But in the middle of a performance, a mysterious user, the Dragon (Takeru Satoh; Paul Castro Jr.), sometimes called the Beast, interrupts by attacking security and a group of self-appointed law enforcement users in the metaverse.

Those virtual police, led by Justin (Toshiyuki Morikawa; Chace Crawford), or Gaston, turn portions of U into a military state in their search for the Dragon, hoping to unveil his real identity to the world. Meanwhile, Suzu, through Bell, finds this illusive antagonist intriguing – his pain feels akin to hers. She finds him, his castle and a host of little AIs that might as well be walking, talking cups, clocks and candlesticks.

Unlike the source material, especially those entries from Disney, “Belle” doesn’t fantasize the Beast’s aggression; it’s a central mystery. And this Bell isn’t searching for romance in a gritty, brutal creature.

Her childhood trauma continues long after her mother’s death, affecting the rest of her life. Suzu’s Bell fits the classic Belle virtually, but Suzu herself goes unnoticed at school. Classmate Ruka (Tina Tamashiro; Hunter Schafer) is the popular girl on campus.

And while Suzu desires to uncover the Beast’s secret motivations, she doesn’t go entirely unnoticed. Her crush Shinobu (Ryo Narita; Manny Jacinto), who declared himself her protector following that tragic event, oft attempts interactions, but our timid lead is quick to excuse herself.

Digital spaces are quite prone to vile behavior from the beastly to tone policing, but those same spaces provide outlets for people struggling in physical reality. “Belle” is mum on social media regulation, particularly how easily bullies and harassers manipulate free-speech talking points. It’s there but drifts into the background come the third act.

U enjoys a more neutral portrayal as a space for all ages, even older folks who join, that projects your unconscious desires into a CG setting. But Suzu’s physical presence still matters, though to say more on why and how reveals an emotional, relevant finale worth leaving unspoiled.

Mind you, “Belle” is more than a complex narrative and thought experiment. The animation and production sail to new heights. Without a hint of hyperbole, the songs in “Belle” stomp on the competition, thanks to contributions from the film’s lead composer Taisei Iwasaki (2022’s “Spriggan”), Ludvig Forssell (a few “Metal Gear Solid” games), Yuta Bandoh (“Poupelle of Chimney Town”) and Tokyo-based music collective Millennium Parade.

As for the animation, this is perhaps the most impressive 2D animated film to date. U’s lavish futurescape and mundane life both pop off the screen. This is all the result of an incredible collaboration, including primary developer Studio Chizu (“Wolf Children,” “Mirai”) along with Disney veteran Jin Kim and Irish animators Cartoon Saloon (“The Secret of Kells,” “The Breadwinner”).

“Belle” is a smart visual masterpiece. Writer-director Mamoru Hosoda and his remarkable team deserve all the praise for creating something so memorable, so thoughtful, so lasting.