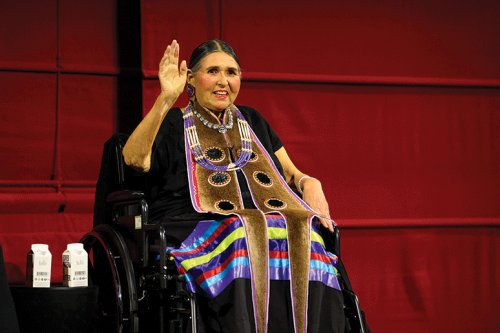 Sacheen Littlfeather, who refused Marlon Brando’s Oscar in 1973, was hosted by the Academy on Sept. 17. (photo courtesy of the Academy Museum Foundation)

On Sept. 17, luminaries from the Native American, Indigenous and entertainment communities came together at the Academy Museum of Motion Pictures in Los Angeles for “An Evening with Sacheen Littlefeather” – a public program focused on celebration, healing and reflection. The event was followed by an intimate private reception. Littlefeather famously appeared on behalf of Marlon Brando to refuse his Oscar at the 1973 Academy Awards ceremony, in protest of the depiction of Native Americans in the entertainment industry.

The museum livestreamed “An Evening with Sacheen Littlefeather” on its YouTube channel. The video will be available online until Friday, Sept. 23. To view, visit youtube.com/watch ?v=wNHtImiC90o. A trimmed version of the event will later be shared to the museum’s channel. In addition, as part of the Academy’s Oral History Projects, the museum has published a nearly four-hour visual history with Littlefeather, interviewed by Academy Museum Director and President Jacqueline Stewart. The mission of the Academy Oral History Projects is to collect, record, preserve and provide access to personal spoken accounts that provide insight into the history and evolution of the art, science and craft of motion pictures. The recording arm of the program – the Visual History Program – has been operating since 2012 and has so far filmed 234 filmmaker interviews (about 940 hours of original content) and preserved another 1,200 historical interviews from other sources.

For information about the Academy, visit ampas.org.