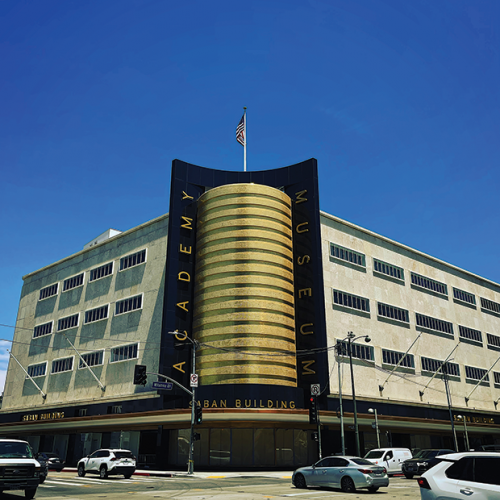 The Saban Building reopened its doors as the Academy Museum on Sept. 30, 2021. (photo by Andy Kitchen)

The Academy Museum of Motion Pictures will celebrate its one-year anniversary on Sept. 30 with a special screening of “The Wiz” (1978), the beloved Motown version of “The Wizard of Oz” (1939), which was shown with a live orchestra accompaniment on the museum’s opening day in 2021. Director Sidney Lumet followed a string of Oscar-winning 1970s classics with this lavish adaptation of the popular Broadway musical “The Wiz,” noted for its lively score and all-Black cast. The Academy Museum’s first anniversary screening of “The Wiz” will feature live dance performances by the Debbie Allen Dance Studio youth performers.

In its first year of operation, the Academy Museum sold more than 700,000 tickets, presented 535 individual film screenings and hosted 137 education and public programs, many of which featured notable film artists. Half the museum’s visitors were under the age of 40 and half identified as belonging to underrepresented ethic and racial communities. The Academy Museum Store also launched to great success, with over $6 million in sales both in-store and online. Additionally, the museum launched a publishing imprint and debuted three catalogues for its temporary exhibitions “H’ayao Miyazaki” and “Regeneration: Black Cinema 1898–1971,” as well as the gallery “Director’s Inspiration: Spike Lee,” in addition to releasing the first season of “The Academy Museum Podcast.” Over the past year, the museum’s membership has grown to more than 24,000 and the website saw 2.2 million unique visitors.

“We are thrilled with the success we’ve seen in the museum’s first year and grateful for the warm welcome we have received from the communities of Los Angeles,” said Jacqueline Stewart, director and president of the Academy Museum of Motion Pictures. “The extraordinary commitment we received from our generous donors has far surpassed our expectations, both in financial contributions and in gifts of important materials which are expanding our collection. The foundation of supporters the museum has cultivated, including visitors of all backgrounds and our growing family of Academy Members, will help us continue to flourish and to serve our mission of advancing the understanding, celebration and preservation of cinema.”

“Since our founding days, the Academy has dreamed of opening a museum that would bring the artistry of filmmaking and the Academy’s unparalleled collection to the world,” said Bill Kramer, chief executive officer of the Academy of Motion Picture Arts and Sciences. “We could not be more thrilled with the success of our opening year, and we are deeply grateful to the Academy Museum team, the Academy Museum Board, our Academy Board of Governors, and all our Academy members who helped to make this possible.”

In its inaugural year, the museum’s exhibition other offerings included “Stories of Cinema,” which spans three floors and 18 different galleries; “Backdrop: An Invisible Art”; “The Path to Cinema: Highlights from the Richard Balzer Collection”; “The Oscars Experience”; “The Pixar Toy Story 3D Zoetrope”; and “Isaac Julien: Baltimore,” which was programmed in conjunction with “Regeneration” and opened on Aug. 21.

Upcoming exhibitions include “Hollywoodland.” opening Fall 2023 and “John Waters: The Pope of Trash,” opening Fall 2023. Updates to the ongoing core exhibition “Stories of Cinema” include “The Art of Moviemaking: The Godfather,” opening Nov. 3; “Directors Inspiration: Agnès Varda,” also opening Nov. 3; object rotations in the “Identity,” “Story,” “Inventing Worlds and Characters: Animation,” and “Academy Awards History” galleries; and new vignettes in the “Significant Movies and Moviemakers” gallery, opening in February 2023, which will showcase the films “Casablanca” (1942) and “BOYZ N THE HOOD” (1991), plus a focus the life and career of the documentarian, visual artist, journalist and activist Lourdes Portillo.

Additionally, Fanny’s Restaurant and Café at the Academy Museum was brought to life by restaurateurs Bill Chait and Carl Schuster with generous support from the Fran & Ray Stark Foundation. Named after Fanny Brice – the legendary movie, vaudeville, theater and radio star portrayed by Barbra Streisand in her Oscar-winning role in “Funny Girl” (1968) – the two-story, 10,000-square-foot space saw more than 150,000 guests in its first year for lunch and dinner service and hosted a number of high-profile private events.