A time for repentance and new beginnings 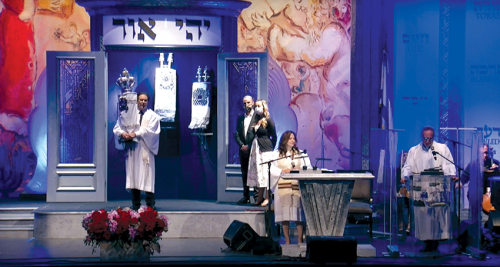 The High Holy Days are ten days of repentance and prayer that mark the beginning of the Jewish calendar and the peak of Jewish spirituality.

Beginning with Rosh Hashanah, observed this year on Sept. 25, and ending with Yom Kippur on Oct. 5, it is a time that invites Jews, who usually attend synagogues in far greater numbers than for other holidays, to repent for the sins they’ve committed over the past year, cleanse their souls and vow to do better in the year to come.

During the High Holy Days, “you reflect on how you’re going to behave for the rest of the year,” said Estherleon Schwartz, a childhood Holocaust survivor and cantor.

“What do you want to do more of … [and] can you make a difference for the wellbeing of all people,” Schwartz said.

Although the worship services that define the holidays are steeped in thousands of years of tradition, they take on new meaning every year, and 2022 is no different.

Wilshire Boulevard Temple will hold in-person ceremonies for the first time since the pandemic, and expects to welcome most of its 2,700 families to its Glazer Family Campus, senior Rabbi Steve Leder said.

At Beverly Hills Temple of the Arts, Rabbi David Baron will ask his congregants to consider how to be of service to others. To underscore his message, he has invited Ukrainian refugees to tell congregants about their experience fleeing from war, as well as a guest who will share how he used his logistics business to provide medical supplies to the embattled country, Baron said.

After founding Congregation Kol-Ami in West Hollywood 30 years ago as a refuge for LGBT Jews amidst the AIDS crisis, Rabbi Denise Eger will lead services for the last time, as she is planning to retire.

“It’s beautiful to watch,” Eger said, reflecting on her congregation’s growth over the last three decades.

After starting with 35 members, the temple now consists of 225 households from a variety of Jewish backgrounds and gender identities, and has been a hotbed of social justice activism, Eger said.

“It’s powerful, to see a generation rise and grow,” she added.

As the High Holy Days are so important in the Jewish faith, it is no wonder that preparation for the services is practically a year-round endeavor.

Leder said that Wilshire Boulevard’s staff begin the logistical preparations for the next year’s High Holy Days soon after they observe the holidays every year.

Rabbis also spend much of the year thinking about what message they will deliver for the Rosh Hashanah and Yom Kippur sermons, which are informed by the needs of their congregants as much as by current events and the rabbis’ own readings and spiritual learning, Eger and Baron said.

But, as much as the holidays’ significance varies from person to person and from year to year,

for most observers, there are some parts of the services that always stand out.

For Eger, that moment is when the congregants and cantor sing the Avinu Malkeinu in unison before the open ark.

For Leder it is Kol Nidre, the prayer ushering in the beginning of Yom Kippur, during which the ark is opened and the Torah scrolls are extracted from within, Leder said.

Baron is always moved by Unetannah Tokef, a prayer that asks “who shall live and who shall die.”

“That’s a very emotional prayer that speaks to our fragility,” Baron said, adding, “after COVID, we all understand … how fragile we are.”

Indeed, nearly three years after the virus spread around the world, its shadow still looms over the upcoming ceremonies.  While all of the rabbis said their temples would host in-person as well as livestreamed services, they invited worshippers in good health to attend in person.

“You should come to the live service and be present with other people sharing that religious experience,” Baron said.

Leder also spoke of the sense of togetherness, the experience of being physically and spiritually close to his congregants, united in prayer, that makes the holidays so special.

“There’s always a moment … when I’m sitting in that stunningly beautiful and inspiring sanctuary, and its full and the music is just transporting everyone. And I feel like it’s the most perfect place on Earth,” Leder said.

Correction: A previous version of this article incorrectly stated the date of Yom Kippur.

Shouldn’t churches have a place for dogs?