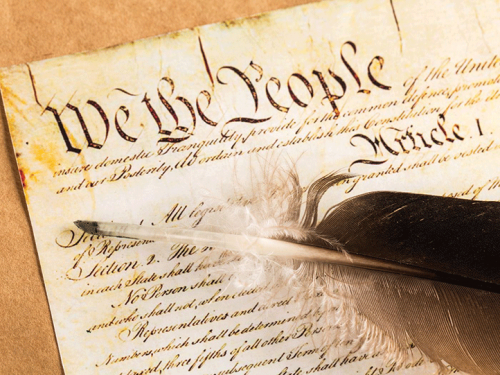 Since its founding in Los Angeles 60 years ago, the Constitutional Rights Foundation has empowered hundreds of thousands of students.

Jasmin Espinoza had never taken public transportation until the summer before her senior year of high school, when she began her internship at the Cayton Children’s Museum (then the Zimmer Children’s Museum).

A first generation college-bound student, her parents could not drive her to and from the museum, and she was nervous to navigate Los Angeles’ public transit alone.

The experience pushed her out of her comfort zone, but through her internship, where she led children’s activities and assisted with museum operations, Espinoza gained a sense of self she has carried with her in the nine years since.

Espinoza is now the office manager of the Constitutional Rights Foundation, the organization through which she secured her internship years ago.

Headquartered off Sixth Street in Koreatown, the CRF runs a myriad of other programs to help students become active participants in democracy and prepare for a professional life.

Through civics instruction, mock trials, research projects and many other offerings, the CRF teaches students how the justice system works and educates them about their constitutional rights.

It helps them find internships, write college admissions essays and advocate for public policy. But besides these tangible benefits, both Espinoza and CRF president Amanda Susskind agree that students gain something deeper.

Susskind said it is important to empower students. A popular program is one in which teens take civic action to combat an issue they care about.

“The number one lesson is … you are an expert in the community. Your voice matters,” she tells students.

Founded in L.A. 60 years ago, CRF now has a national reach.

The organization instructs teachers on how to implement its civics curriculums in their own classrooms, and teachers take those lessons with them wherever they go.

Susskind estimates that, with tens of thousands of teachers having received training from CRF, hundreds of thousands of students across the country have been impacted by the organization. While much of its work focuses on underserved communities, some of its programs, including the popular mock trial, are administered in private schools as well, Susskind said.

In L.A., the Expanding Horizons Institute, the CRF’s internship program for first-generation college students, remains one of its most transformative.

Syrabi Nur Rahman, a junior at Robert F. Kennedy Community Schools, has long known that she wants to become a lawyer. She happened upon CRF when Googling career opportunities last year, and after being interviewed and accepted into EHI, a coordinator encouraged her to apply for a legal internship at Disney.

After an interview, Rahman was accepted, and she spent four weeks embedded in the Disney legal operations team, she said.

Prior to her internship, Rahman was hesitant to ask legal professionals about their work. After attending seminars organized by EHI that discussed the importance of networking and putting those lessons to use, Rahman gained confidence and was eager to ask questions of her colleagues.

They responded to her enthusiasm in kind, opening her eyes to opportunities the legal profession has to offer, she said. “And now I have these … lists of connections with law professionals that I would have never had if I didn’t speak to them. And as a junior in high school who is an aspiring lawyer, that’s a very valuable thing to have,” Rahman said.

Espinoza similarly became more outspoken during her internship in 2013, a transformation she witnessed in other students when she returned to work for CRF six years later.

“That was pretty interesting, to actually see the students going through the same things that I did,” Espinoza said. “To see them change, it’s really inspiring.”

Susskind joined the CRF in the midst of the pandemic, following 18 years as the Los Angeles regional director of the Anti-Defamation League. With the 2016 and 2020 presidential elections, she started paying close attention to an increase in political polarization, and she views her work at CRF as a way to undo polarization and fend off the extremism it breeds.

Susskind believes the strongest human instinct is the need to belong, and many people join extremist groups just to satisfy this need.

Reflecting on her upbringing as the child of immigrants, Susskind said that while many people from similar backgrounds are grateful for the opportunities they have in this country, they don’t know how to participate, and don’t feel entirely at home.

By becoming informed citizens, students gain an agency that makes them more active participants in democracy and more likely to reject extremist beliefs, she said.

Through its programs and civics curriculums, CRF “is giving them a sense of belonging in this country,” Susskind said.

She added that all interested teachers are encouraged to visit the website for more information about how to get involved.

Peace and quiet at All Saints' Church