A Canter’s regular, from the other side of the counter, turns 80 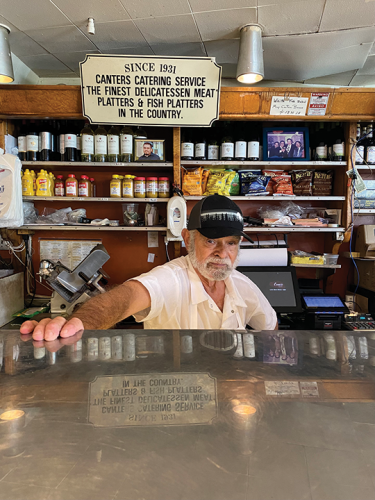 George K. has been working at Canter’s Deli since 1964. (photo by Rance Collins)

“[Alan Canter, then-owner] says, ‘You capable of doing this?’ I said, ‘Let me show you what I can do, and we’ll take it from there. If it’s not to your liking, let me know. No hard feelings,’” George recalled.

It was to their liking. George quickly became one of the restaurant’s most valued employees. He even met his late wife Virginia at the deli.

“A roommate of hers used to work the counter,” George said. “[Virginia said], ‘I’m looking for a job.’ I said, ‘Have you worked in a restaurant before?’ She said, ‘Nope.’ But I could feel it that she could do anything … I said, ‘Don’t worry about a thing. In a year’s time you’ll be the top gun in here.’ I was not wrong.”

At the time, Virginia had a 1-year-old son. By the late-1960s, the couple was married and managing the restaurant, with George handling the deli counter and Virginia in charge of the dining room.

“While we were working together, we never had an argument – at the store. Outside, it’s a different story, man and wife,” George chuckled.

For many years, George worked night shifts at the 24-hour restaurant, but as his family life took on greater importance, the Canters moved George to day shifts. Even now, working part time, Canter’s continues to be his home base.

“He’s the hardest working guy I know,” said Jacqueline Canter, whose family owns and operates the restaurant. “Even at 80 years old, the guy can out do 25 year olds who are working with him right now. He can wait on three customers at once. You’ve never seen a harder working person, who’s more devoted to Canter’s, and we treat him like family.”

Canter, who has known George virtually her entire life, said that he attended her wedding, and he also helped screen her dates prior to that.

“When I was 18 years old, I would have a date, [and if] he didn’t like the way the date looked, he’d throw the guy out of there. He treated me like I’m a daughter to him,” Canter said.

George said that the Canter family thought so highly of him, that when his mother passed away, several members of the family came to his home and stayed with him for a week to help him through the mourning process.

Over the years, George has become a local favorite.

“He treats Canter’s like it’s his restaurant,” Canter said. “[For him], it’s not just a job, it’s a career [and] it’s a way of life.” Every day, Canter went on to say, customers come into the store and specifically ask for George.

“A lot of people come in [and ask], ‘Is George still here?’ Lots of people,” George said. “There’s an older lady who comes in and says, ‘When I see you, I feel great.’”

George is so ingratiated with the community that in 2019, James Corden and Eddie Redmayne surprised him with a singing telegram for his 77th birthday, that aired on “The Late Late Show with James Corden,” which tapes at Television City.

“A lot of the celebrities, they are nice people,” George said, mentioning that the restaurant’s proximity to Television City on Beverly Boulevard leads to a lot of drop-ins from television and film stars.

In his tenure, George has seen quite a few of them, including Jerry Lewis, Paul Newman, Joanne Woodward, Kareem Abdul-Jabbar, Wilt Chamberlain, Sonny Bono and Cher.

George said Canter’s is the heartbeat of the Fairfax district.

“If there wasn’t a Canter’s, there wouldn’t be no Fairfax,” he said. Canter’s has existed in Los Angeles since 1931, and it has been at its current location since 1953. In the restaurant’s now-69 year history at the location, George has been a part of all but 11 years.

“I feel better when I’m here,” George concluded, adding that he plans to keep working at Canter’s as long as he is able.

New project may tower over Wilshire and San Vicente